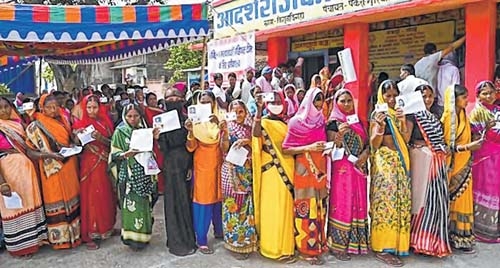 New Delhi, Nov 7
The threat of coronavirus could not affect polling in the third and final phase of Bihar State elections, with 55.22 per cent people turning up to vote -- a shade lower than the 56.66 per cent in 2015. Two of three exit polls so far have predicted an advantage for the alliance of Tejashwi Yadav's Rashtriya Janata Dal, the Congress and the Left parties. The election will be crucial for Chief Minister Nitish Kumar, who is seeking a fourth straight term. Mr Kumar -- who is facing challenge from Tejashwi Yadav and ally-turned rival Chirag Paswan -- in a last minute announcement yes-terday, said this would be his "last election". Tejashwi Yadav's rallies have seen massive crowds, his promise of 10 lakh jobs being a huge draw.
Here are the top 10 points in this big story:
NDTV's poll of polls says the opposition coalition will win 124 of Bihar's 243 seats and the NDA, 103. Chirag Paswan's Lok Janshakti Party (LJP) is given six seats.
"We stand at a unique point of history. We had apprehensions how polls would be conducted during the pandemic. It is because of confidence of voters," the Election Commission said, making the announcement this evening. "We thank voters of Bihar and other by-elections particularly senior citizens, women and persons with inability," the officials added.
"We made changes and revamped training, and particularly polling station infrastructure, sanitizing protocols for one lakh polling stations and it was a challenging task," the Election Commission said.
The Election is being held after a long and bitter campaign, where the NDA was led by Prime Minister Narendra Modi, even though officially, its face was Chief Minister Nitish Kumar.
The BJP quietly made the shift as ground-level feedback indicated that anti-incumbency was strong against three-time Chief Minister Nitish Kumar. The opposition alleged that the people's anger was fed by the Chief Minister's handling of the migrant situation during the lockdown, local-level corruption  and the prohibition.
At a rally on Thursday, Nitish Kumar said that this would be his "last election". "Today is the last day (of campaign for the final phase of the election). The day after, this election will end and this is my last election. Ant bhala to sab bhala (All's well that ends well)," Nitish Kumar said. His aides later clarified the statement as "last election rally".
It was, however, interpreted differently by rivals Tejashwi Yadav and ally turned chief critic Chirag Paswan, who made biting comments. "I have been saying since the beginning of this campaign that he is tired. Today, before the last phase of voting, he has accepted defeat," Tejashwi Yadav tweeted. "Don't elect a person who will not come to you for blessings tomorrow," Chirag Paswan warned voters.
The RJD, once considered an election-winning machine in Bihar, is hoping for a comeback, enthused by the response its chief ministerial candidate Tejashwi Yadav, 31, received in his over two dozen rallies. The RJD is part of an alliance comprising its old ally, the Congress, besides the Left parties.
Midway through the campaign, Chirag Paswan, whose lok Janshakti Party is an ally of the NDA, rebelled against the leadership of Nitish Kumar and said it would contest solo. His rebellion was suspected to be backed by the BJP -- the party's non-action him fed the speculation.
Counting of votes for the three-phase election will be held on November 10. The majority mark in the 243-member assembly is 122. Votes will also be counted for the by-elections for 56 seats across 11 states that were held alongside the state polls in Bihar. NDTV