IPAK to organise online dance competition from Nov 20 to 30 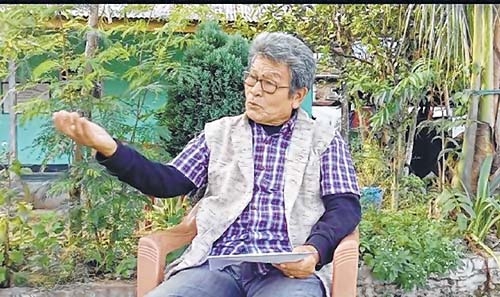 By Our Staff Reporter
Imphal, Nov 7: Padmashri awardee Warepa Naba has appealed to the lasses of Manipur to take part in the State level solo dance competition Esheigi Tanthada Eikhoigi Ningolsing, which will be held from November 20 to 30 virtually.
The competition will be organised by Ipak Films Production Manipur.
Speaking to media persons during a press meet held at Iboyaima Shumang Leela Shanglen, Palace Compound, Warepa Naba stated that the competition aims at promoting Manipur culture through dance.
Lasses between 6 to 25 years are eligible for the competition, he added.
Ipak Films Production Manipur, founder member,  Chana Lembi, secretary Rakesh Naorem, sponsor of the competition Mutum Robindro also attended the press meet.
Chana Lembi said that Esheigi Tanthada Eikhoigi Ningolsing was launched in 2009 at MDU Hall with her as the festival director.
Many contestants in the earlier editions of the competition have become well-known actresses, singers etc., she said and urged young girls/women to showcase their talents through the competition.
According to Rakesh Naorem, the competition will be based on Manipuri film and modern song.
He also said that online registration of the competition had begun from November 4 and willing candidates can apply till November 15.
Winners of the competition will be given Rs 11, 111 (1st); 7,777 (2nd) and 5,555 (3rd) along with citations respectively while dancer receiving highest numbers of  Like in YouTube will be conferred IPAK Media Best Popular People Choice Award which carries a cash prize of Rs 4,444, he said and added that the 4th, 5th, 6th and 7th positions of the competition will also be awarded Rs 2,222 each along with a citation as a consolation prize.
For more information, contact 8413971429  or 9863445122, he added.