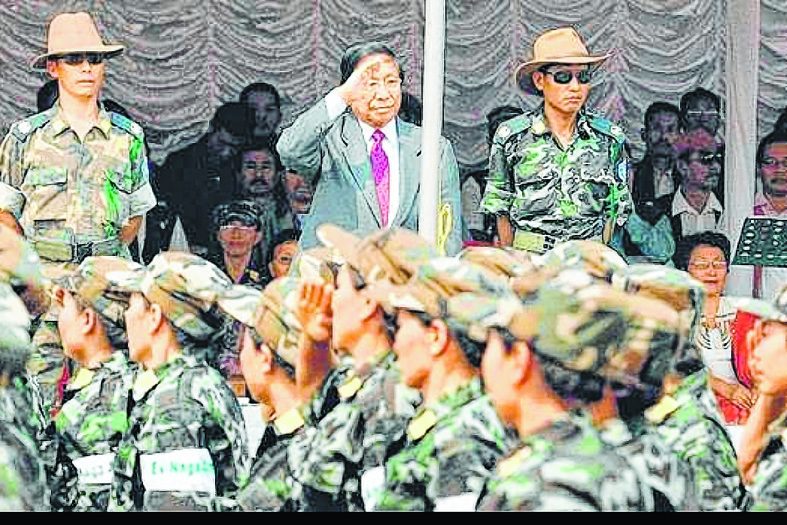 PTI
NEW DELHI, Dec 29 : NSCN (IM)'s demands for a separate Naga flag and Constitution amid the Covid-19 outbreak prevented conclusion of Naga peace talks in 2020. Many Nagas had hoped for a resolution of the issue, with the conclusion of separate talks between the Centre and the National Socialist Council of Nagaland (Isak-Muivah) and the Naga National Political Groups (NNPGs) comprising seven organisations, in October last year.
Nagaland, with its limited resources, initially struggled to grapple with the novel coronavirus but subsequent improvement in health infrastructure helped the State administration to take effective measures to contain the pandemic.
The State's major tourism event--the Hornbill festival--was not organised this year due to the pandemic while Christmas, Eid and Durga Puja celebrations were subdued.
The NSCN (IM) reaffirmed its demand for a separate Naga flag and Constitution before it could sign the peace deal, while the Working Committee of the NNPGs said it was ready to go ahead with the agreement without placing any such conditions.
The NSCN (IM) also shot off a letter to Prime Minister Narendra Modi demanding the resumption of over two-decade-old political dialogue between the group and the Centre in a third country at the 'Prime Ministerial' level without any precondition.
Governor and the Centre's Interlocutor for Naga peace talks, RN Ravi, created a controversy with his remarks about armed gangs running their own Governments in the State challenging the legitimacy of the elected authority and creating a "crisis of confidence" in the system.
More drama was witnessed as the main Opposition party Naga People's Front (NPF) walked out of the State Assembly's Joint Legislators' Forum on the Naga political issue over alleged inaction.
NPF legislators led by the leader of Opposition TR Zeliang held separate talks with the NSCN (IM) and NNPGs on September 14 to work together for a solution to the Naga political issue.
Though the NSCN (IM) and NNPGs expressed their willingness to work together not much progress could be made.
Union Home Minister Amit Shah, on the other hand, held separate meetings with Chief Minister Neiphiu Rio and NPF leader TR Zeliang in New Delhi on October 20, following which the duo issued a joint statement on December 18 expressing their willingness to work together to bring different Naga groups together for a solution.
Nagaland reported its first three cases on May 25 among returnees from Chennai. Since then, the State has reported 11,895 infections till December 25.
There are now 274 active cases in the State, while 11,413 people have recovered, 77 patients have died and 131 migrated to other States.
Around 30,000 stranded residents, including over 13,000 workers, had returned to the State during the lockdown. The pandemic hampered school and higher education as all educational institutions have remained closed since March. The State School Education Department, however, reached out to students through online platforms, radio and TV. The COVID-19 outbreak, however, also came as a blessing in disguise with improvement in health infrastructure of the State.
While Nagaland did not have a single biosafety level (BSL) 3 laboratory prior to the outbreak, the first such facility was inaugurated by the Chief Minister at Naga Hospital in Kohima on May 21, followed by BSL 2 laboratories in Dimapur and Tuensang districts later.
The State now has 1,986 beds in COVID-19 Care Centres, while the number of ventilators has increased to 68 and ambulances in Government hospitals to 110. The administration created 330 different posts of medical personnel during the period.
NDPP nominee Medo Yhokha won Assembly byelections to the Southern Angami-I seat while Independent candidate T Yangseo Sangtam bagged the Pungro-Kiphire Constituency. In February, the Assembly passed the State budget of Rs 21,068.85 crore for 2020-21 fiscal by voice vote.
Transport unions of Assam imposed an economic blockade of Nagaland at the inter-State border following the killing of a truck driver in Dimapur district on September 22.
It was lifted after the district administration gave a written assurance to the deceased's family to promptly investigate the matter.
Both Nagaland and Assam have stressed on the need for regular communication between senior officials of the two States on border issues.
Union Minister for Road Transport and Highways Nitin Gadkari virtually laid the foundation stones of 15 National Highway projects in Nagaland on December 4. Highways with a total length of 266 km will be constructed at an estimated cost of Rs 4,127 crore.
However, the ongoing four-laning of NH-29 from Dimapur to Kohima is yet to be completed despite missing the initial deadline by two years. The National Highways and Infrastructure Development Corporation Limited (NHIDCL) has assured the Government that the work will be completed before the monsoon next year.
The State administration banned the use of non- biodegradable materials for making posters used at Government programmes.
The Government also established the Nagaland Staff Selection Board but has not yet made it functional after the Eastern Naga Students' Federation demanded a grant of 45 per cent job reservation to six tribes from five districts of eastern Nagaland.
The administration has constituted a Cabinet sub- committee to look into the demand and submit a report to the Government.
Nagaland Lokayukta Justice Uma Nath Singh in September dismissed corruption charges against Deputy Chief Minister Y Patton, ruling the allegations were devoid of any substance.
Assembly Speaker Sharingain Longkumer dismissed the NPF's petition in July to disqualify its seven rebel MLAs for supporting ruling PDA nominee Tokheho Yepthomi in the Lok Sabha elections going against the party's decision to support Congress candidate KL Chisi.