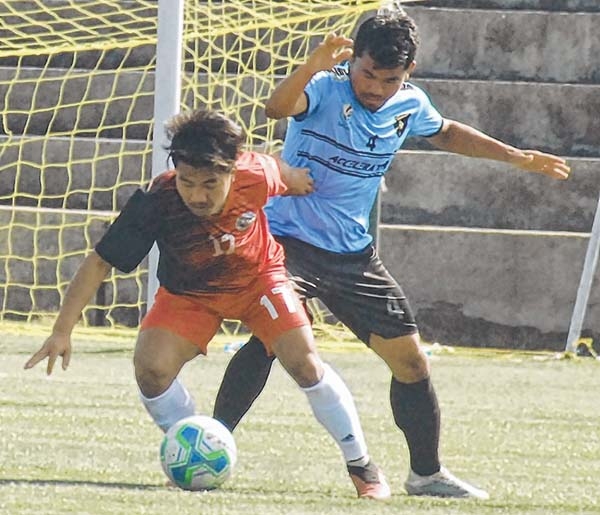 By Our Sports Reporter
IMPHAL, Feb 10 : Defending champions NEROCA and Muvanlai notched up impressive wins in their opening matches at the 13th Manipur State Level being underway at Football Turf Khuman Lampak under the aegis of All Manipur Football Association. The first match between UKB and Muvanlai however failed to start as scheduled earlier due to uniform irregularities within UKB players causing great inconvenience to the spectators. The issue also forced to delay the commencement of the second match between NEROCA and GSC.
In the fourth match of the 15-team tournament, Muvanlai, Sadar Hills eased to a 3-0 win against UKB (United Khawzim Brothers), Churachandpur  riding on Cleaven Hmar's double and Songpu's late goal.
Muvanlai took off the game on a bright note creating chances with some impressive runs testing UKB defence before Cleaven Hmar drew first blood in the 29th minute.
The impetus remained with the Sadar Hills' team as UKB were struggling to put together a show. UKB however made sure that there was no further scoring in the remainder of the first half.
After the break, Muvanlai restarted their usual business with midfielders and forwards making a seemingly well communication to stretch the defence line on few occasions looking for the gap and Cleaven Hmar was at it again completing his brace in the 55th minute to ensure his team a 2-0 lead.
UKB stunned by the two goals looked to come out of their half in a bid to reduce the gap but Muvanlai defence proved too strong to get past and thus failed to open their scoring account. To further their misery, Songpu slammed home in the 76th minute and eventually earned Muvanlai a convincing 3-0 win. The one sided match ended clean with neither side receiving any booking.
In yet another similar clash, holders NEROCA, Sangakpham sealed a comfortable 3-1 win against GSC as Khaminthang, Manglem found the net lately.
NEROCA and GSC were relatively at par in the first half and despite NEROCA enjoying a slight edged in terms of scoring chances, the first half ended goalless.
The goalless spell continued for a major portion of the second half before Khaminthang broke the deadlock in the 80th minute with a clinical finish. NEROCA's celebration continued with Manglem scoring the team's second two minutes latter and Khaminthang raced deep into hapless GSC area to grab his second one minute into stoppage time.
GSC however had a face saving goal through Satgouthang the next minute as NEROCA surged home 3-1. GSC's Lungunhao (44') and Jangneithang (60') were yellow carded by the referee for their unsportsmanlike behaviours.
February 11 matches
AIM, Khabam vs NACO, Nambul Mapal from 12.15 pm
SSU, Singjamei vs AFC, Thoubal from 2.15 pm.