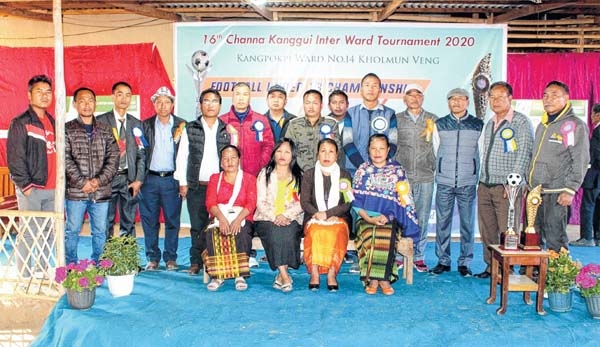 Correspondent
KANGPOKPI, Feb 10 : Kholmun Veng Ward No 14 celebrated on winning Under-13 Football (Boys) title and finishing runners up in women's volleyball at the recently concluded 16 th Kanggui Inter Ward Tournament 2020.
Lunseh Kipgen, Chairman KTC graced the occasion as chief guest while Haopu Chongloi, Chairman Ward No 17 and Thangngam Lhanghal, Chairman Kholmun Veng Ward No 14 as  guest of honour and functional president respectively.
Apart from other members of KTC, KWWO and KYU leaders, Henmang, Head Deacon KCBC attended the function as Minister and Lalminlen Misao, MPS, Addl SP Kangpokpi and Kaybie Chongloi, local senior journalist attended as special guest. Established in 2006, Kholmun Veng Ward No 14 represented the ward in the recently concluded 16 th Kanggui Inter Ward Tournament 2020 in men’s football (main, veteran and Under-13), men’s and women’s volleyball.
The ward won the Under-13 football title defeating rival Ward No 1 in the final match while women’s volleyball team had to contend with the runners up title after going down in the hands of Ward No 8 in the final match.
“It is nothing but the blessing of Almighty upon Kholmun Veng Ward No 14”, said Chongboi, wife the Ward Chairman and offered the thanksgiving alter/offering which was dedicated later by the Minister.
Kholmun Veng Ward No 14 Chairman, Thangngam Lhanghal said that the achievements indeed moves every denizens of the ward though it might be too small to be celebrated for many other ward as many of the ward denizens recollected the past how they all came together to shelter in the ward to begin a new journey of life.