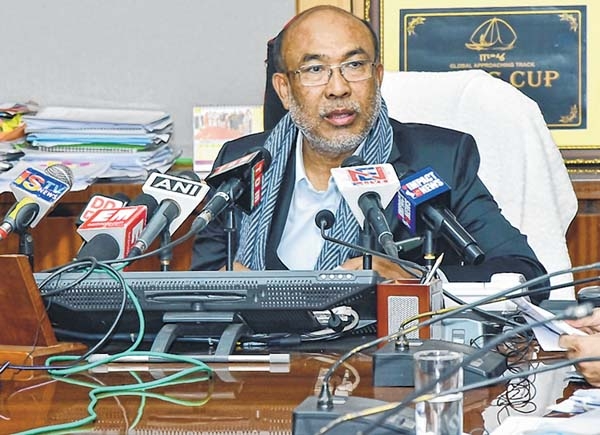 By Our Staff Reporter
IMPHAL, Feb 11: A Cabinet meeting held today decided to implement the 7th UGC pay scale from April, regularise the service of Professors who are working at Manipur Technical University on contract basis  and appoint 300/400 numbers of post to different departments of the State Government.
Briefing media persons after the Cabinet meeting at the Chief Minister’s Secretariat, Chief Minister N Biren informed that the Cabinet meeting discussed about the ongoing agitation of college teachers and agreed to implement the 7th UGC pay scale from April this year in congruence with the agreement struck earlier for implementation of the 7th Pay with respect to employees of the State Government.
The meeting also decided to table the Bir Tikendrajit Private University Bill, Cultural University Amendment Bill, Professional Tax Bill and two Appropriation Bills in the forthcoming Assembly session.
A sub-treasury office would be opened at Tadubi as agreed at the Cabinet meeting, Biren said.
The Chief Minister said that the Cabinet meeting also discussed about the Governor’s address as well as the State budget.
It was agreed in-principle to provide housing loans to State Government employees who wish to construct houses having six/seven storeys (vertically) after taking loan from HUDCO Bank, Biren informed.
He said that this idea is aimed at checking loss of space due to construction and expansion of houses and other structures horizontally.
The sewerage project was another agenda of the meeting and the Cabinet discussed about putting the project on trial  with active involvement of the Deputy Chief Minister, WRD Minister and PWD Minister.
The State Cabinet also agreed to table a Bill on the matter in the forthcoming Assembly session.
Saying that a total of 300/400 posts would be appointed to different departments of the State Government, Biren informed that veterinary staff, nurses and teachers are included among the posts to be appointed.
The State Cabinet decided to appoint 300/400 posts after taking into due consideration the presence of many vacancies in different departments and problems posed by shortage of manpower in implementing different schemes, Biren said.
The Cabinet meeting further discussed about who would be allowed to use flag-posts and agreed to ascertain a level below which flag-posts would not be allowed.
The State Cabinet also agreed to provide a suitable Government job to a rape victim, added the Chief Minister.