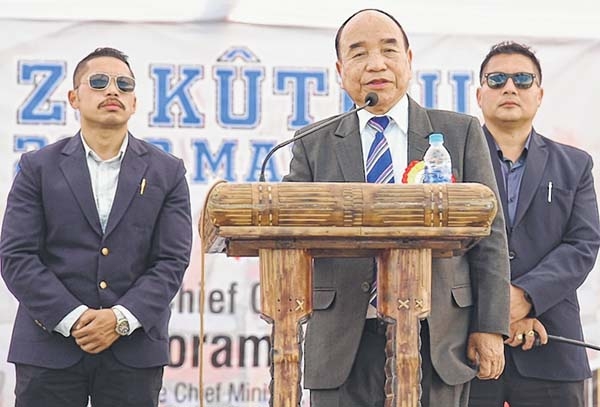 Our Correspondent
CCpur, Feb 12 : Chief Minister of Mizoram Zoramthanga who attended the Zo Kutpui (Zo Festival) today at Churachandpur’s Kawnpui village has called on the Zo descendants of the region to shed the disparities that keep them alienated and try to find a platform which can usher in a deal to ensure peace, development and security.
A former rebel himself, Zoramthanga’s visit to Churachandpur this time apparently was with a peace mission as he has publicly declared that he has been assigned to usher in peace in the region. He said Central leaders from Vajpayee to Modi and Amit Shah have asked him to find a deal that could bail the region out of its current turmoil and the Zo Kutpui which his Government is co-hosting at Churachandpur is also a step towards realizing the mission amongst the Zo-kindreds tribes in the State of Manipur.
There’s a peace deal in Tripura; in Garo Hills of Meghalaya and in Assam. The Nagas are ceaselessly working for peace. Everyone else is working to find peace. The Zo descendants in Manipur too should work for finding the same, he said.
‘The Zo Kutpui with a running theme of ‘We are One’ is an initiative to bring the descendants of ‘Zo’ closer but it is high time we do more than the talking. The Central leadership is open to a deal but in order to have that deal we need to have a common voice. We need to be wedded in agreement,’ he told the crowd.
Zoramthanga also said that he now realizes that Churachandpur is a hostile place to see an agreement from all communities or groups and hence offered to host all the stake holders, underground or overground, at Aizawl to help them find a collective ground as his Government will not shy away from its own people.
The Mizoram Chief Minister further asserted that he anticipates to see the realisation of the Zo people in Manipur when he host their leaders soon after the  Mizoram budget session concludes.
‘It is not the time to argue on the name of an unborn baby, let us first work for a deal to have the baby born. We will then have the name,’ he said in a apparent reference to a political deal the armed groups are working for.
Towards the conclusion of his speech Zoramthanga laced it with faith and Biblical phrases saying, his offer for negotiation at Aizawl should not be read as that of from Zoramthanga but should be instead read as a calling from God. ‘You need to be clear that the offer comes from God, then all things that keeps you apart will die,’ he said.
The Chief Minister was accompanied by his Cabinet colleague Romawia Royte and the Additional Chief Secretary, JC Ramthanga while all six MLAs from Churachandpur including the State Agriculture minister V Hangkhanlian, Thanlon MLA Vungzagin Valte, Singngat MLA Ginsuanhau Zou, Henglep MLA Thangzalam Haokip, Saikot MLA TN Haokip, Tipaimukh MLA Dr Chaltonlien Amo graced the event along with members of ADC Churachandpur and several other hill districts.
The Chief Minister also shared the dais with the tribe leaders and planted trees yesterday evening while hosting them to a dinner.