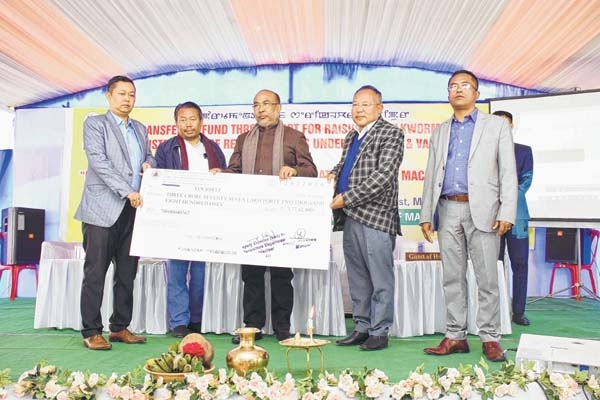 Imphal, Feb 13 (DIPR): Chief Minister N Biren Singh distributed Rs 11,18,54,800 to 1300 beneficiaries of Integrated Sericulture Development Project (ISDP) in a function held at Manipur Sericulture Project Management Complex, Sangaipat in Imphal East district today.
The Chief Minister transferred a total amount of Rs 7,41,12,000 to the bank accounts of 1000 beneficiaries of valley districts through DBT and handed over a cheque of Rs 3,77,42,800 to the Managing Director of Manipur State Co-operative Bank Ltd, A Subhash for further distribution to 300 beneficiaries of hill districts.
The beneficiaries would utilise this amount in the plantation of silkworm food plants and construction of rearing houses. N Biren also handed over 150 motorised cum pedal operated spinning machines to 60 different Self Help Groups and 30 individual farmers under Rashtriya Krishi Vikas Yojana (RKVY) at the function organised by the State Sericulture Department.
Speaking at the occasion, Biren said that sericulture is suitable to the soil of Manipur and the State can gain dividends from this sector. Maintaining that activities related to handlooms, handicrafts and weaving had always been parts of Manipuri life, the Chief Minister expressed optimism that Manipur could enhance its economy if people focus on sericulture.
Stating that the plants which are used as feeds for silkworms attain maturity in three years, the Chief Minister said that there is no need for extra care if these plants once attain maturity.
Noting that vast tracks of fertile land in hill areas are left waste while some parts are being planted poppies, the Chief Minister asserted that the Sericulture Department should impart awareness about the benefits of growing these silkworm-food plants in place of poppy in hill areas.
The Chief Minister said that the Government is ready to provide assistance for earning livelihood to villagers for three years i.e. till the attainment of maturity of silkworm-food plants.
The Chief Minister also suggested the Department to have a monitoring system to keep an eye on the works of beneficiaries.
Stating that there are many hard working people in the State, the Chief Minister said that State’s economy would flourish only when the rural economy thrives.