Coronavirus deaths surge beyond 1500 in China 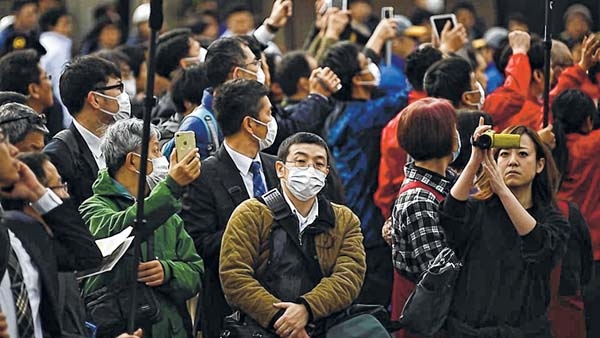 Beijing, Feb 15
China reported another sharp jump of more than 140 deaths from the coronavirus (Covid-19) outbreak overnight as capital city Beijing imposed mandatory 14-day self-qua-rantine for those returning to the city.
Beijing authorities announced the new rule late on Friday night as the city attempts to cope with a staggered return of millions after the extended Chinese New Year (CNY) holidays amid the outbreak.
Those not following the quarantine or the rules in containing the outbreak will be punished, city authorities said.
The announcement comes as China continues to struggle to contain the epidemic, which has now killed 1523 and infected over 66500 across the country.
Among the new deaths, 139 were in Hubei province, two in Henan, and one in Beijing and Chongqing respectively, the national health commission said Saturday morning.
The commission added that 11,053 patients remained in severe condition, and 8,969 people were suspected of being infected with the virus.
A total of 8,096 people had been discharged from hospital after recovery.
The commission, as quoted by the state media, said 513,183 close contacts had been traced, adding that among them, 30,081 were discharged from medical observation Friday, with 169,039 others still under medical observation.
The state-controlled Beijing Daily cited a notice from Beijing’s virus prevention working group put out late on Friday night: “From now on, all those who have returned to Beijing should stay at home or submit to group observation for 14 days after arriving. Those who refuse to accept home or centralised observation and other prevention and control measures will be held accountable under law.”
Anyone returning to Beijing will be required to submit travel plans to their community in advance, the notice added.
Beijing, a sprawling city of 21 million, has so far reported nearly 400 cases of Covid-19 and four deaths.
As of Thursday midnight, 77 clusters of infec- tion cases of novel coronavirus were reported in Beijing, the State-controlled China Daily reported.
Among them, 70 cases were infected by family members, said Pang Xinghuo, deputy director of the Beijing Center for Diseases Prevention and Control.
“Multiple family clusters of infection cases occurred in Beijing recently, and it’s vital to put every citizen under quarantine at home for protection,” she said.
Chinese President Xi Jinping on Friday urged an improvement in the preventive mechanism in response to major public health crises and the country’s public health emergency and management system. Xi also stressed the importance to roll out a biosecurity law as soon as possible.
Xi, according to state media, encouraged the use of big data, AI, cloud computing and other digital technologies to support epidemic monitoring, analysis and resource allocation.
More than two dozen countries have confirmed cases and several have suspended trade and travel links with China in a bid to contain the spread of the virus.
So far, three deaths have been recorded outside mainland China - one each in Hong Kong, the Philippines and Japan.
Egypt reported its first case of the coronavirus on Friday, becoming the first country in the African continent to confirm a case, and the second in the Middle East region, after the United Arab Emirates diagnosed its first cases late last month, the Al Jazeera reported. Hindustan Times