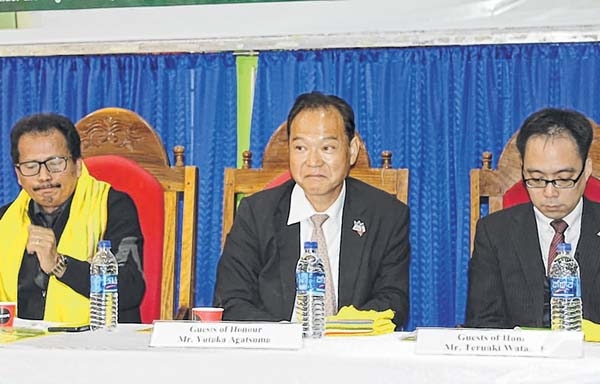 By Our Staff Reporter
IMPHAL, Feb 16: A one-day international workshop on ‘Alternative Plants for Opium-Poppy’ was held at VC’s Court Hall, Manipur University (MU) today.
The workshop was jointly organized by Department of Forestry & Environment Science, MU, Manipur Khadi and Village Industries Board (MKVIB) and South East Asia Centre for Agricultural Sciences and Humanities (SEACASH) under the aegis of Apunba Imagi Machasing (AIMS), Manipur  and Marjing Industries Private Limited, Imphal.
Speaking at the function, CSIR– NEIST, Imphal Senior Principal Scientist H Birkumar said that the main reason for mass scale poppy cultivation is due to the fact that it is highly profitable and can be harvesting within a short time although it requires low inputs.
He further said that research should be done on which suitable and alternative crops could replace poppy cultivation in terms of economy, technology and time consumption.
A crop having lower value and which requires more labour and time cannot replace poppy cultivation as the people who grow poppy plants have the tendency to get money and comfort within a short time.
Birkumar then pointed out cultivation of medicinal and aromatic plants as a possible  alternative to replace poppy cultivation in the State.
He maintained that the said task also requires a lot of research and analysis.
Saying that a farmer cannot be simply insisted to grow certain crops or plants without having transportation and marketing facilities, Birkumar said that having good transportation and marketing facilities are a must to persuade farmers to switch to alternative crops.
He added that farmers will be reluctant to grow medicinal plants if transportation and labour charges are high and if they get meagre profit after deducting all these expenses.
The Senior Principal Scientist then mooted the idea of setting up drug processing units/pharmaceutical industries in the State while claiming that such effort will be quite beneficial in the long run to fight the menace of poppy cultivation.
Birkumar also conveyed that implementation of certain projects have been already started in the State in line with this.
He said 500 hundred acres of land have been identified in the State for lemon grass cultivation and six oil distillation units have been installed and three more such units will be installed within March this year.
If processing units are established in the State with financial assistance from Government and funding agencies, it will go a long way in enhancing farmers’ income, the Senior Principal Scientist added.
Alternative Plant for Opium-Poppy, Sendai, Japan Chairman Yutaka Agatsuma said that he is determined to help the people of Manipur.
Asserting that he has dedicated a long part of his life in search of alternative plants for poppy plantation in Myanmar, he shared his experience of reviving a community in Myanmar-China border which had been once misled and gone through catastrophic phase due to mass indulgence in poppy cultivation
Yutaka then stated that he started planting medicinal herbs Korean Zinsser and fruits, and sold them in Japan to revive the community.
He went on to say that he is thinking of introducing some profitable cash crops in the State while adding that he is delighted to take part in the seminar and is willing to provide all possible assistance to make Manipur a self sufficient State.
Kakching A/C MLA Y Surchandra said that alternative crops for poppy cultivation should be able to provide adequate income to the farmers.
He questioned why ganja plantation cannot be legalized so that the produce can be procured by Government or private companies for manufacturing medicines if it can be used for manufacturing medicines.
The MLA also said that so many unnecessary restrictions have been imposed in growing ganja for the last 70 years yet ganja plantation has been going on in a clandestine manner.
Saying that exploring an alternative means for poppy plantation is quite necessary, Surchandra urged all concerned to come up with concrete suggestions which could really be implemented.
He also said that every farmer will be interested if there is an alternative means which can give more income to the farmers.
Ganja is very suitably grown on the soil of the State and there is no harm in legalizing ganja cultivation if medicines can be made from it, he opined.
Speaking as chief guest, MKVIB Chairman L Radhakishore said that the menace of drug and crimes has been growing in the State with the mass scale poppy cultivation now becoming an ugly reality.
Claiming that capitalists and businessmen are behind the mass scale poppy cultivation, he said that people who live from hand to mouth are being lured into the said business.
He observed that poppy cultivation can be replaced within a short while if there is alternative means which are economically viable.
The gradual vanishing of traditional ways of livelihood and the resulting poverty often lead people to take recourse to illegal or socially harmful means for survival.
Claiming that many departments are trying to find viable alternatives to replace poppy cultivation in the State, Radhakishore suggested that mass scale coffee plantation could be another source for adequate income generation for the people of the State apart from being a viable alternative to poppy cultivation.
He also said that a trial of coffee plantation proved successful and measures are being taken up to encourage commercial coffee plantation in the State.