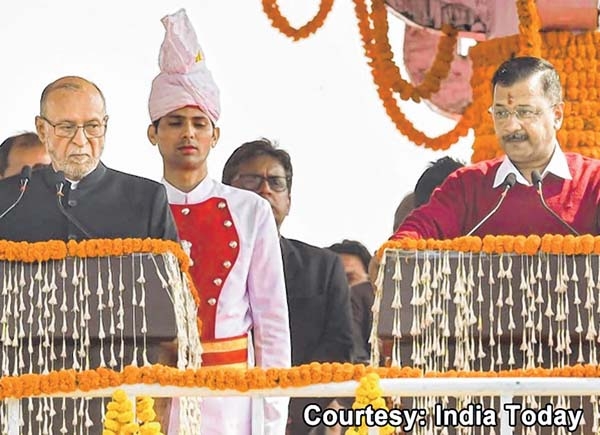 New Delhi, Feb 16
Aam Aadmi Party (AAP) leader Arvind Kejriwal was on Sunday sworn in as the Chief Minister of Delhi for the third time in a row as thousands cheered him on in the Ramlila Maidan in the heart of the National capital.
Next to take the oath of office was his right-hand man Manish Sisodia, who was similarly egged on by the crowd at the Ramlila Maidan, which was decked with tricolours, party flags, posters and placards.
Lieutenant Governor Anil Baijal administered the oath of office and secrecy to Kejriwal and his six Ministers.
Before the National anthem was played, patriotic songs could also be heard at the Ramlila Maidan as excited party workers, as well as the crowd with tricolour painted on their faces, clapped on.
Some wore the AAP’s caps as they cheered for Kejriwal and shouted slogans like “Humara Neta Kaisa Ho, Arvind Kejriwal Jaisa Ho” (Our leader should be like Kejriwal).
A banner with ‘Nayak 2 Has Come Again’ was also seen at the sprawling ground. It had a photograph of Bollywood actor Anil Kapoor on the left and Arvind Kejriwal wearing AAP’s cap on the right.
The poster references the 2001 Hindi political thriller ‘Nayak’, a remake of Tamil film Mudhalvan (1999) in which Kapoor plays a reporter who becomes Chief Minister of Maharashtra for a day and strikes out at corruption.
The 50 “Dilli ke Nirmata” or Delhi’s architects, including teachers, bus marshals, sanitation workers and families of firefighters from different walks of life, also shared the stage with Kejriwal during his swearing-in ceremony.
The AAP almost repeated its 2015 performance by winning 62 of the 70 seats in the Delhi Assembly polls in the face  of a high-voltage and bitter campaign by the BJP, which had fielded a battery of Union Ministers, Chief Ministers, legislators to canvass for votes. The Bharatiya Janata Party (BJP) managed to win the rest of the eight seats from its earlier tally of three seats. Congress just like the last time drew a blank.  Hindustan Times