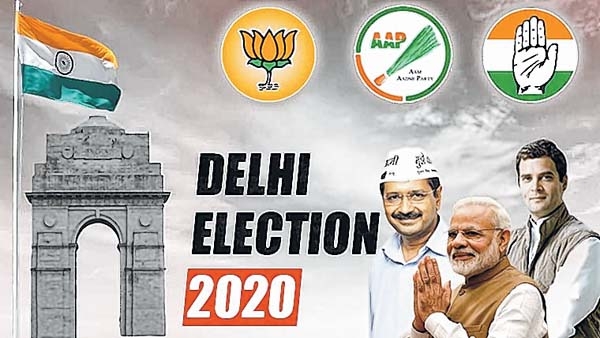 New Delhi, Feb 2
Union Ministers Amit Shah, Rajnath Singh and Smriti Irani addresses rallies in the National capital on Sunday ahead of the Delhi Assembly elections slated for next week.
BJP National president JP Nadda will also hold rallies in the city. Also, Uttar Pradesh Chief Minister Yogi Adityanath will also address two public gatherings.
On the other hand, Delhi Chief Minister and Aam Aadmi Party (AAP) National convenor Arvind Kejriwal held roadshows at Kirari, Mundka, Vishwas Nagar, Laxmi Nagar and Rithala.
Speaking at a rally in Dwarka, Singh, in a veiled reference to Kejriwal, on Saturday accused the AAP leader of betraying his mentor and social activist Anna Hazare by joining active politics and questioned that how he will be able to maintain the trust of people.
"Anna Hazare repeatedly told them (AAP) to not form a political party. He said they are fighting against corruption. He had promised people of India that those fighting beside him will not join active politics for some time. But despite that, they formed one," he said.
"They formed government too as they had joined the political arena through Anna Hazare. But AAP did not implement any of the policies of the Narendra Modi Government in Delhi, even when other State Governments did that," the defence minister added.
Voting in all 70 Assembly constituencies of Delhi is scheduled to take place on 8 February. Counting of votes will take place on 11 February.
On the other hand, BJP Rajya Sabha MP Dr Subra-manian Swamy on Sunday exhaled confidence of his party's win in the upcoming Delhi Assembly elections saying it'll grab "41+" seats. In a tweet, Swamy said that BJP's poor economic performance has been overtaken by road blocking of the "Tukde Tukde gang". The Aam Aadmi Party currently leads the government under Chief Minister Arvind Kejriwal.