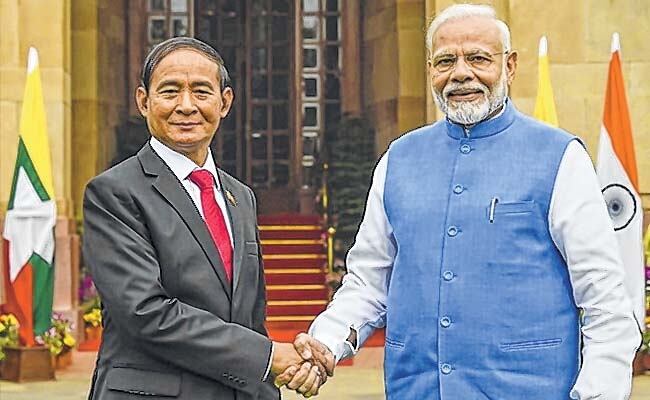 New Delhi, Feb 27
India and Myanmar on Thursday exchanged 10 agreements, four of which focus on construction of water supply systems, dis-tribution of electricity by solar power, as well as construction of roads and schools in Rakhine State, located on the western coast of the South Asian country.
The deals were signed in the presence of Prime Minister Narendra Modi and Myanmar President U Win Myint at the Hyderabad House today.
Last month, India had extended relief assistance including noodles, toor dal, chana dal, soya oil, chili powder, and other edible materials, to Rakhine residents who were displaced in the ongoing conflict in Myanmar as part of its continued endeavour to support the socio-economic development of the region.
India and Myanmar had signed a Memorandum of Understanding (MoU) in December 2017 on providing assistance to the socio-economic development of Rakhine State.
The other agreements called for cooperation for prevention of trafficking in persons; rescue, recovery, repatriation, and the re-integration of victims of trafficking.
The two sides also called for cooperation in timber trafficking, and conservation of tigers and other wildlife, communication, and transport, as well as Indian assistance for the implementation of quick impact projects (QIP).
The Myanmar President, who is on a four-day visit to India, is accompanied by the First Lady Daw Cho Cho.
He met Prime Minister Modi at the Hyderabad House earlier today and discussed a wide range of bilateral issues.
The dignitary also met External Affairs Minister (EAM) S Jaishankar and received a ceremonial welcome at the Rashtrapati Bhavan. He then laid a wreath at Rajghat, the samadhi of Mahatma Gandhi.
In the evening, the Myanmar President is scheduled to meet President Ram Nath Kovind at the Rashtrapati Bhavan.
President Myint is also slated to visit Bodh Gaya. In the Buddhist holy city, the visiting dignitaries are expected to offer prayers at the Mahabodhi Temple. On Saturday evening, they are scheduled to visit the Taj Mahal in Agra.