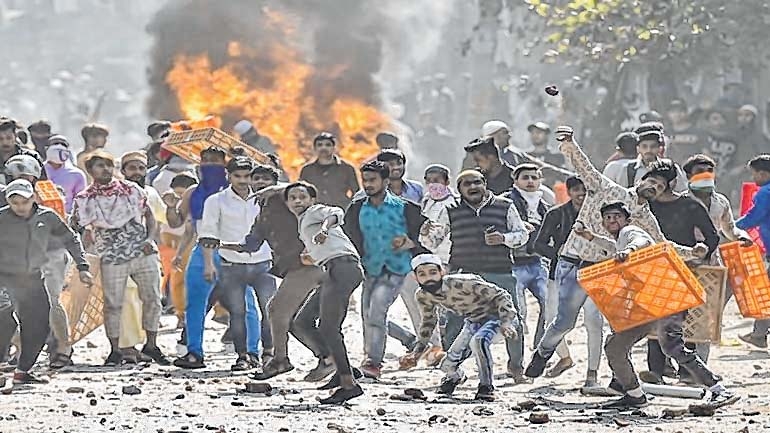 New Delhi, Feb 27
The death toll in the northeast Delhi communal violence over the amended citizenship law rose to 38 on Thursday.
34 people in total have died at GTB hospital, one in Jag Pravesh hospital and 3 in Lok Nayak hospital. Delhi Police head Constable Ratan Lal was also killed in clashes on Monday. On Wednesday, the death toll was 27.
Hospital authorities on Wednesday said of the deceased at the GTB, at least nine received gunshots. One of the deceased is also a woman, authorities said.
At the GTB Hospital, many grieving family members were waiting to collect the bodies of their dear ones. Asked if the victims have been identified, GTB Hospital Medical Superintendent had on Wednesday said, "Many people have been identified, some are yet to be."
Patients have several kinds of injuries, including from gunshots, stones and other weapons and many were hurt while jumping from rooftops to escape the rioters, hospital authorities said.
The injured recount horrific accounts of violence that they witnessed and how they managed to escape the deadly violence.
After two days of clashes, a brittle quiet settled over parts of riot-hit northeast Delhi on Wednesday but there was violence in some other places with shops set ablaze and the body of an IB staffer found in a drain.
Shops and schools were closed and many streets deserted with police making announcements that no one should come out of their homes.
There was heavy deployment of force in Chand Bagh with security personnel not allowing anyone to come out. In Gokulpuri, smoke darkened the skies with rioters setting on fire shops.
As police conducted flag marches and security personnel spread out across the northeastern edge of the national capital in a bid to quell the violence raging since Sunday, Prime Minister Narendra Modi in his first reaction appealed for peace and brotherhood.
National Security Advisor Ajit Doval visited some riot-hit areas.
"What has happened has happened. Inshallah, there will be complete peace here," he said as he walked through the mostly mixed neighbourhoods and congested lanes of northeast Delhi and met locals.
On Tuesday, he undertook a late night tour with Delhi Police Commissioner Amulya Patnaik and newly appointed Special Commissioner S N Shrivastava.
The Delhi Police said it has arrested 106 people for their alleged involvement in the violence and have registered 18 FIRs. "No untoward incident was reported on Wednesday and PCR calls from northeast Delhi have reduced," Additional Commissioner of Police (Crime) Mandeep Singh Randhawa told reporters.
Calling the situation in northeast Delhi "alarming", Chief Minister Arvind Kejriwal said the Army should be called in as police is "unable" to establish control.
CPI(M) general secretary Sitaram Yechury described the Delhi violence a "chilling reminder" of the 2002 Gujarat riots and demanded that Army should be called to control the situation. Holding the Centre and the Delhi government responsible for the violence -- perhaps the first time since 1984 that the city has seen such scenes of communal mayhem -- Congress president Sonia Gandhi called for the resignation of Home Minister Amit Shah.
"The conspiracy was witnessed during Delhi polls and BJP leaders gave hate speeches creating atmosphere of fear and hatred," she said.
An apex court bench of justices S K Kaul and K M Joseph lashed out at law enforcing agencies for allowing the "instigators of violence" to get away and said they should act as per law without waiting for somebody's nod. "If somebody makes an inflammatory remark, police have to take action," it said.
The Delhi High Court also reprimanded Delhi Police. "... We should never allow another 1984... especially under the watch of the court and under your (Delhi Police) watch... We have to be very, very alert," a bench of justices S Muralidhar and Anup J Bhambhani said. India Today