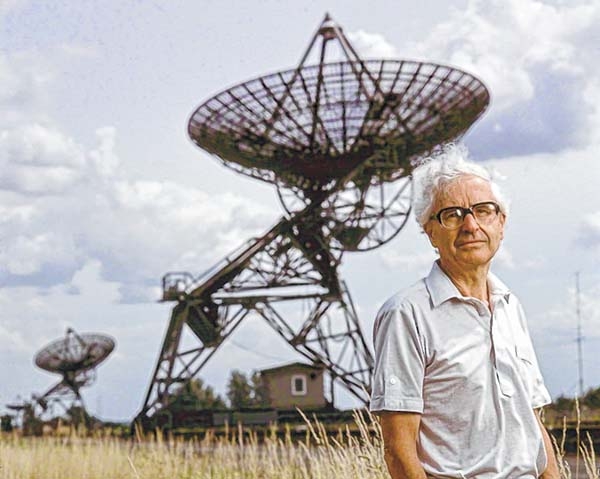 Prof H Nandakumar Sarma
The discovery of microwave background radiation, neutron star, pulsar; trying to understand the cosmic forces, the discovery of anisotropy of cosmic microwave background radiation, the discovery of Higgs boson ( God’s particle ), the detection of gravitational wave and black hole etc are some of the exciting moments in the understanding of the universe. In this series, we trace some of the great cosmic discovery made from the beginning of the 20th century to the present day.
We are familiar with the twinkling of visible stars. In 1950s,Antony Hewish of the radio astronomy group of the Cavendish Laboratory of the Cambridge University was trying to understand why radio stars also twinkled. He was able to show that radio stars also twinkled because of plasma clouds in the ionosphere at heights around 300km. Antony Hewish was born in Fowey Cornwall, England on May 11, 1921. His undergraduate study began at Gonville and Caius College, Cambridge in 1942, but discontinued for three years because of
World War II. From 1943 to 1946, Hewish was at the Royal Aircraft Establishment, Farnborough and the Telecommunication Research Establishment, Malvern, where he was concerned with airborne radar devices. In 1946, Hewish returned to Cambridge to complete his undergraduate study and received his degree in 1948, and doctorate in physics in 1952. He was a university lecturer in physics from 1961 to 1969. He was elected to the post of professor of radio astronomy at Cambridge in 1971. In 1965, Hewish planned to carry out a large-scale survey of more than 1000 radio galaxies using interplanetary scintillation. For this, a very large aerial consisting of over 2048 dipoles covering  an area of about 4.5 acres was constructed.
One day around the middle of August 1967, Hewish’s student Miss Jocelyn Bell noted recurrent pulses on the recording chart around midnight. On 28th November 1967, the group obtained the first evidence that the mysterious source was emitting regular pulses of radiation at interval of just greater than 1 sec. No one could believe that any natural source from cosmos will emit pulse of radiation in that fashion. Hewish and his research team began to think that the source was a very small extraterrestrial body, perhaps a planet outside the solar system.
They even had to consider the exciting possibility that the source from the planet was artificial rather than natural. In anticipation of the possibility that the pulses were artificial, Hewish designated the source LMG. LMG stood for “little green men”. Some even thought that some intelligent being some where in the universe was sending out radio signal towards the earth. Hewish finally decided that a possible mechanism for the pulses was a compact object, such as neutron star. The prediction of the existence of stars composed of tightly packed neutrons, with astounding densities of billions of grams per cubic centimeter, had been made in 1934 by Walter Baade and Fritz Zwicky. By February 1968, Bell had found three additional sources. Thomas Gold first suggested that the rotation of neutron stars provided the simplest and the most flexible mechanism to explain the origin of such regular radio pulses. Now there seems little doubt that such signals have their origin from . rotating neutron stars, the end of supernova explosion! Such objects are known as pulsar (pulsating radio sources). Four pulsars were described in a publication in ‘Nature’ Journal, which served as basis for Hewish’s Nobel Prize in Physics.
The months following Hewish and Bell’s Nature publication were filled with a flood of information and observations on pulsars, reported from all over the world. Neutron star is a by product of a supernova explosion. This by product is a spinning body with a diameter of about 10 kilometres and a mass slightly greater than that of the sun.
This is strongly supported by the discovery of pulsar in the Crab Nebula. The nebula is known to be the result of a supernova event that had been visible to the naked eyes in A.D.1045 by the Chinese. The discovery of pulsar provided the first observational evidence of the existence of a super and supercompact stellar state.
This discovery also provided great stimulus to the structure of superdense stars and exotic configuration resulting from a supernova event — the black hole. For their work, Anthony Hewish and Sir Martin Ryle of the Cavendish Laboratory of the University of Cambridge were awarded Nobel Prize in Physics for the year 1974.
( H. Nandakumar Sarma was Professor of Physics and former Vice Chancellor of Manipur University).