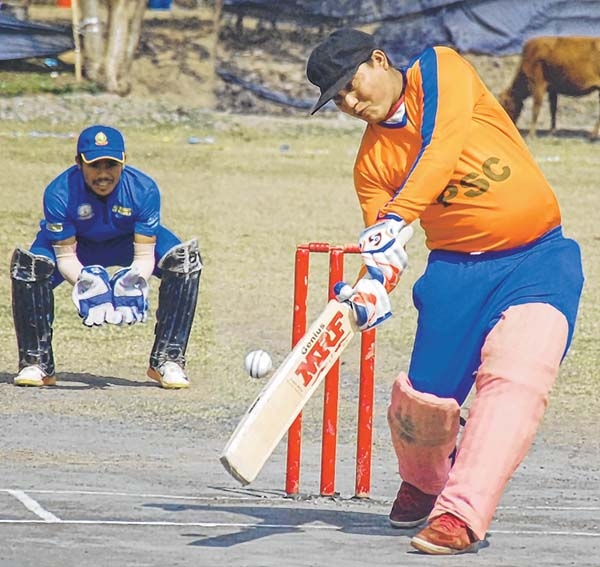 By Our Sports Reporter
IMPHAL, Feb 3 : Al-Ameen, Lilong and YWC, Langthabal earned their fourth wins to finish Group winners respectively at the ongoing 3rd Heibok Trophy T-20 Cricket Tournament organised at Langthabal Public Ground.
Al-Ameen thrashed PSC, Khuyathong by 44 runs to emerge Group B winners and made their way to the semi-finals. Mustaque shone with a 36 ball 52 in Al Ameen's innings after winning the toss. Masir and Farooque too had sensible outing with the bat and ensured Al Ameen a 140 runs total for 8.
PSC, Khuyathong's Bhomendro, Rash Bihari and Prashanta bagged two wickets each in this innings before they managed 96 runs for 7 in the chase.
PSC lost 3 crucial wickets to Aten of Al Ameen in the chase while Najarul scalped two wickets and Mustaque got a single to ensure their team a comfortable win.
Maidon made the most 34 runs in the chase while Jeelish and Bhomendro managed 19 and 13 runs as Al Ameen bowlers were best at maintaining economy.
Mustaque who hit a half century in Al Ameen's 140 runs total was adjudged man of the match.
Al Ameen will play Group A runners, FORCE in the semi-final on February 5 from 10 am onwards.
Meanwhile, YWC registered their fourth victory beating FORCE, Kshetrigao by 74 runs and ensured Group A top place today.
Jiko and Prakashmani struck half centuries with 59 runs off 47 balls and 53 runs off 44 balls respectively in their names to help YWC set up a huge target of 167 runs for 7 after winning the toss and opting to bat first. FORCE's Qurshid, Ashar and Arshad picked up a wicket each in this innings before witnessing themselves collect 92 runs for 9 in the chase as Kishan of YWC bowled too well to collect 4 wickets in 4 overs and tremendously slowed down the pace of the chase.
Bingson of YWC also managed two wickets of FORCE in this innings which saw Samir topscore with 27 runs off 31 balls. Jahid and Arshad also added 17 and 13 runs each in a losing cause.
Kishan who was pick of YWC bowlers, eventually earned the man of the match accolade.