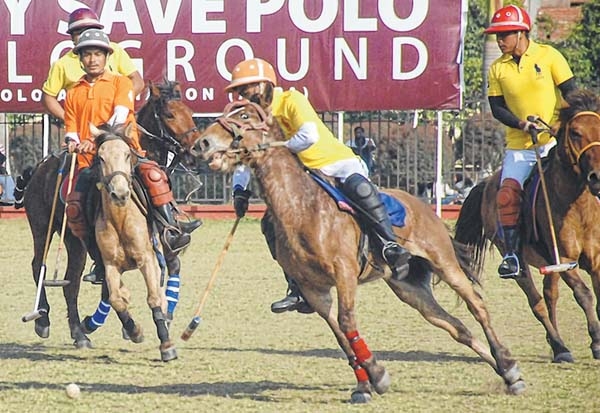 By Our Sports Reporter
IMPHAL, Feb 3 : CRPF Polo Team posted a 5-1 win against Samurou Polo Club and Thoubal District Polo Association (TDPA) edged out ESC-A 9-4 today to make themselves through to the quarter finals of the 36th Men's State Level Polo Tournament being organised by All Manipur Polo Association at Mapal Kangjeibung.
In the first match of the day, CRPF Polo team rode on H Muhindro double to upset Samurou Polo Club by 5-1 goals.
Th Tombi opened up the scoring account just 1 and half minutes into the first chukker before H Muhindro doubled the advantage in the last minute of the chukker.
Muhindro scored his second in the 2nd minute of the second chukker before O Roger and Th Sushil chipped in one goal each to make it 5-0 past the Samurou team.
Samurou Polo Club which were outpaced by CRPF team riders throughout the game however grabbed a consolation goal through A Abung in the 7th minute of the third chukker as fourth chukker saw neither team finding the target.
CRPF Polo team are set to meet MPSC-B in the quarter final.
Meanwhile in another last 16 round clash staged latter, TDPA earned the 9-4 win against ESC-A as L Atangba, Th Jacob and P Ojit all scored three goals each.
TDPA started brightly taking a 2-0 lead till first chukker thanks to goals by L Atangba and Th Jacob but conceded thrice in the second chukker as ESC-A fought back to make it 3-4. Atangba and P Ojit scored it for TDPA in the chukker while A Cameron, Y Suraj and A Lamyanba found the target for ESC-A.
Th Jacob connected to goal twice and L Atangba added a single to push TDPA far past ESC-A in the third chukker which saw A Cameron score his second and ESC-A's last.
P Ojit then took honour to convert twice and wrap up the game 9-4 for TDPA in the last chukker.
TDPA will clash with Paradise Polo Club in the quarter final.
Tuesday's matches (quarter finals)
Nagamapal Youth PC vs Khurai PC from 1 pm; MPSC-C vs Chingkheihunba PC from 2 pm.