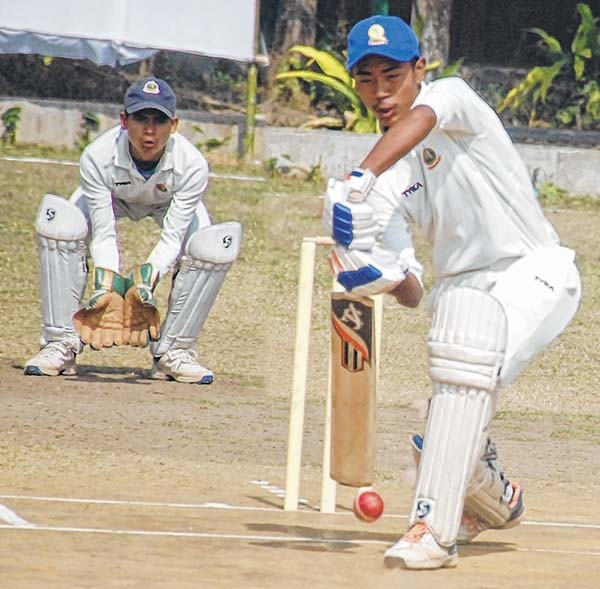 By Our Sports Reporter
IMPHAL, Feb 3 : OSCAR, Paona Bazar and RCA, Lilong post contrasting wins in today's Group B league matches of the 2nd MNCA U-16 Boys Naorem Rajningthou Memorial Trophy 2020.
OSCAR won by 67 runs against PTCC, Patsoi today at Luwangpokpa Cricket ground after OSCAR defended their 94 runs total with ease riding on Kaushal's five wicket haul. OSCAR won the toss and elected to bat first and sadly it was a scrappy show for the team as only Vishal and RK Ray could manage double digit scores with 26 runs in their names before the team bundled out for 94 runs in 18 overs.
PTCC's Anao bagged three wickets off his spell of 4 overs while Ch Nikhil and Sylvas picked up two wicket each to trigger OSCAR collapse.
To everyone's surprise, PTCC were bowled out for 27 in 11.1 overs as Kaushal of OSCAR wreaked havoc across their batting line up to pick up 5 wickets alone. Santosh too added the teeth to the bowling attack by dismissing two and Abdul had a wicket.
Elsewhere at Model Hr Secondary and Oriental College ground, RCA chase downed CYCLONE's total of 113 for 8  after the latter team elected to bat first. Ali Karim fetched 16 runs for CYCLONE in the first innings before Manglemba smashed an unbeaten 48 in 68 balls to set up a target of 119 runs. The inning saw RCA's Pravesh and Zamir share two wickets apiece  while Imran, Iliyas and Arish pick up a wicket each. Zamir (14), Alfash (10), Saad (12), Iliyas (24) then kept the chase alive despite losing Imran on duck before Rufaat (12) and Safwan (2) did the finishing work making it 117 runs in 26.5 overs with one wicket left to spare. Bikash of CYCLONE enjoyed a 3 wicket haul and was successful in heaping pressure on RCA for a while. Ronald, Samsung and Manglemba also managed 2 wickets each.
PCC will play YUCC at Luwangpokpa ground tomorrow while Blue Hawk will face Model Club at Oriental College ground.