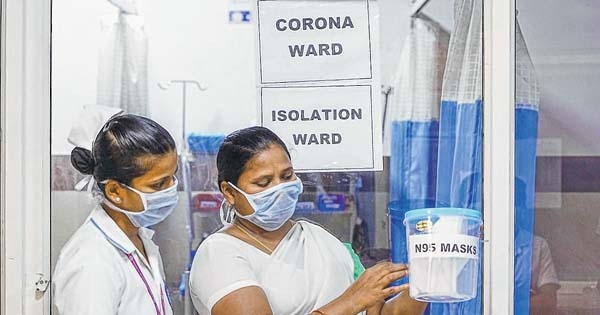 KASARAGOD, Feb 3
A 19-year-old medical student, who returned from China, has tested positive for the Wuhan coronavirus and is being monitored in an isolation ward in the District Hospital in Kanhangad.
This is the third confirmed case in Kerala, said Minister for Health KK Shailaja. Of the 104 samples checked till Sunday, three tested positive for the coronavirus, she said in a statement.
The student's friend is also under observation in the district hospital, though her test result was yet to come, said health officials.
The first case of the Wuhan coronavirus in India was reported in Thrissur and the second in Alappuzha. "The condition of all the three patients is stable and there is no cause for concern," the Minister said.
Seventy-six people had returned to Kasaragod district from China, mostly from Wuhan, where the outbreak happened. "We are in touch with every person who returned from China," said district medical officer AP Dinesh Kumar.
He said the student who has tested positive showed symptoms of common cold and runny nose. "But his condition is stable," he said. He has been kept in the isolation ward of the District Hospital in Kanhangad.
According to medical officials, the student and his friend -- both medical students in a college in Wuhan -- arrived in the district five days ago. They gave their swabs for testing at the District Hospital before going home. Health officials said the students landed in Delhi and took another flight to Kochi, from where they came to Kasaragod.
Both the students are in the isolation ward in the district hospital. "We have sent the swab of the second student also for testing. The result is yet to come," said an official.
The health officials, said the DMO, were invested in stopping the spreading of the virus. The coronavirus infects the respiratory passages, and spreads like influenza, he said. "We have advised those who have come from China to keep their interaction with others to a minimum and stay indoors for three weeks," Dr Kumar said.
Around 360 people have died and 17,000 people in at least 23 countries have tested positive for the Wuhan coronavirus in the past three weeks. Express News Service