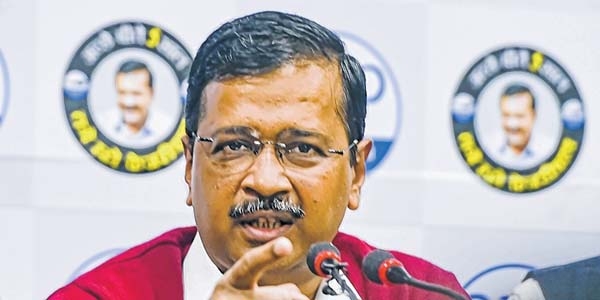 NEW DELHI, Feb 4: Aam Aadmi Party National con-vener Arvind Kejriwal on Tuesday dared BJP to name its Chief Minister candidate for the February 8 Assembly elections, saying he is ready for a debate with the saffron party's CM face.
Speaking to the media after releasing the party manifesto, Kejriwal said it is the people in a democracy who elect a Government. "Amit Shah is saying people should vote for the BJP and he will select the Chief Minister after the elections. In a democracy, people elect their Chief Minister. Shah cannot select the Chief Minister," he said.
He said he wants the BJP to name its CM candidate with whom he wanted to have a debate. He said in a democracy, debate is very important. "I give time till 1 pm. on Wednesday to the BJP for this." He said people should know who will be the Chief Minister if BJP comes to power, saying, "what if the BJP selected an uneducated Chief Minister for Delhi. That will be a cheating to the people."
Kejriwal said he is seeking votes in his name, saying all the votes for the AAP will go to Kejriwal. "People want to know where the votes to the BJP will go. People are asking who will be the BJP's face."
Speaking about the manifesto, Kejriwal said in the last five years, they have spent their time in improving the basic infrastructure. "We want to make Delhi a 21st Century city. We cannot do it alone but we need help of 2 crore people.
The manifesto speaks about all classes, including business, labourers, women, sikh, youth, and senior citizens. We considered the demands of all the classes." IANS