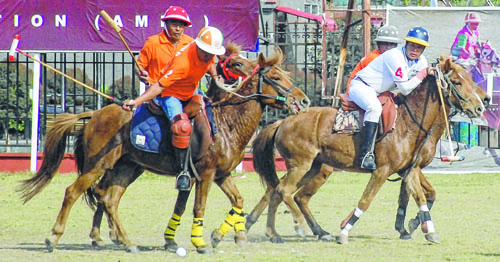 By Our Sports Reporter
IMPHAL, Feb 5 : MPSC-B will be meeting Thoubal District Polo Association (TDPA) in the second semi-final match of the 36th Men's State Level Polo Tournament on February 7 at 2 pm. The day will also see Khurai Polo Club meet MPSC-C in the first semi-final at 1 pm.
MPSC-B sealed their placed in the semi-final by thrashing CRPF Polo Team by 8-3 goals in a one side quarter final match at Mapal Kangjeibung today.
H Abung Khuman was simply unstoppable today as he topscored with 5 goals for MPSC-B in their 8-3 victory and T Pradeepkumar made his mark by scoring twice before O Suresh chipped in the final goal in the last chukker.
The two teams started cautiously and were locked at 2-2 till the end of the first chukker before MPSC-B surged ahead from the second chukker. O Rozer scored both the goals for the CRPF team in the first chukker and H Abungkhuman who opened up the scoring in the first minute for MPSC-B had his second lately to make it 2-2.
H Abung Khuman continued his stellar form to add twice within three minutes before T Pradeepkumar found the target and made it 5-2 past the CRPF team. CRPF team did not lose hope and were able to grab another in the last minute of the chukker through O Seitajit's mallet.
The third chukker went lull with neither side converting their chances but MPSC-B were able to stretch the gap further with T Pradeepkumar, H Abungkhuman and O Suresh taking their turns to add a goal each for the 8-3 finish.
Meanwhile in the last quarter final match of the tournament, TDPA fought back from two goals down to Paradise Polo Club (PPC) in the first chukker to seal a dramatic 11-2 comeback win and complete the semi-final line up.
M Anando and K Samananda got their names on the scoresheet as Paradise Polo Club took a 2-0 lead in the first chukker but TDPA made a sharp turn in the second chukker with L Kokeshor, L Atangba and P Ojit scoring a goal each to make it 3-2.
There were no looking back since then for the team as L Atangba and Th Jacob scored two goals each in the second chukker to make it 7-2 as Paradise Polo Club almost looked out of contest and hardly had their sticks on the ball. The dominance continued in the fourth chukker as well with L Kokeshor completing his double and Y Dijen who came in place of P Ojit grabbed two goals on the trot before L Atangba landed the final blow.