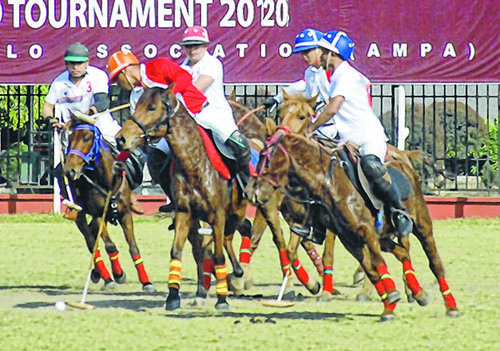 By Our Sports Reporter
IMPHAL, Feb 7 : MPSC-C and Thoubal District Polo Association (TDPA) scripted similar 8-1 wins against their respective rivals to make it to the final of the 36th Men's State Polo Tournament 2020 being underway at Mapal Kangjeibung  under the aegis of All Manipur Polo Association.
In the first semi-final match staged today, S Abungcha scored four goals to help MPSC-C dump out Khurai Polo Club by 8-1 goals.
MPSC-C seized ground since the first chukker and riding on a goal each by S Viking, M Jawan and S Abungcha the team took a 3-0 lead.
The second chukker saw Kh Nanao grab Khurai Polo Club's lone goal before S Abungcha had his second to put MPSC-C further ahead.
The third chukker was all about S Abungcha scoring twice to further extend the lead before Kh Dinesh made it 7-1 and S Viking then took the honour to chip in the final nail.
The second semi-final match was also a similar outing as TDPA saw off MPSC-B by 8-1 goals thanks to a bulk of four goals by P Ojit. P Ojit and L Atangba had their account opened in the first chukker to make it 2-0 and P Ojit continued his form to score all two goals in the second chukker to make it 4-0 for TDPA till halfway.
MPSC-B's misery continued in the third chukker as well with P Ojit completing his fourth early on and Th Jacob and L Atangba keep the scoreboard ticking by scoring  a goal each.
L Atangba also grabbed his second and the team's last in the 6th minute of the last chukker before H Abungkhuman find the face saving goal off a last ditch effort.
The final match will be played on February 9 from 1.30 pm onwards at Mapal Kangjeibung.