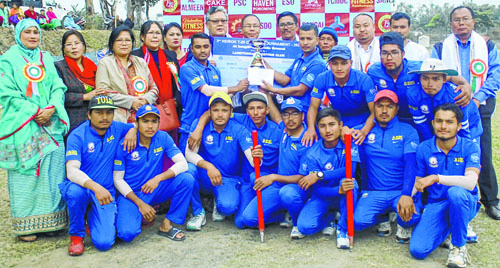 By Our Sports Reporter
IMPHAL, Feb 8 : Al-Ameen claimed the title of the 3rd Heibok T-20 Cricket Tournament organised by Langthabal Sporting Club at Langthabal under the aegis of Manipur Cricket Association at Langthabal Public Ground.
Al Ameen took the title of the tournament today beating SCCC, Singjamei by 26 runs in the final match.
Al Ameen rode on Al Bashid's brilliant knock off 88 runs off 55 balls and Nasir sensible 37-run contribution off 20 balls, to post a modest total of 163 runs for 4 after electing to bat first.
Saroj also contributed 19 runs to Al Ameen's tally.
SCCC's Pinky grabbed 2 wickets in 3 overs in this innings as Biren and Langamba claimed a wicket each before they succumbed to 137 runs for 7 in the chase.
Nanao hit a half century with 69 runs off 53 balls but his effort was not enough for SCCC to give a good fight as the team lost three crucial wickets to Noushad of Al Ameen and two to Nasir.
Sana and Borish also added 16 and 12 runs to SCCC's tally in the chase which also witnessed Aten of Al Ameen finish with a wicket.
Bashid who topscored for Al Ameen with 88 runs was named man of the match.
Winners, Al Ameen were feted with  a trophy (rolling) and a cash prize of Rs 50,000 while runners up, SCCC got a trophy and a cash prize of Rs 30,000 during the closing ceremony of the tournament which was graced by Revenue Minister, Karam Shyam among others as dignitaries.
Avinas of FORCE, Kshetrigao (13 wickets and 77 runs) was named man of the series and Mustaque of Al Ameen who managed 197 runs emerged the highest run getter. Avinas of  FORCE and Noushad of Al Ameen who claimed 13 wickets each were jointly named as the highest wicket taker of the tournament. They were feted with trophies and cash prize of Rs 2,000 each. SCCC's Ulenyai who was named best wicket keeper and man of the final match, Bashid of Al-Ameen were also feted with trophies and cash prize of Rs 2,000 each.