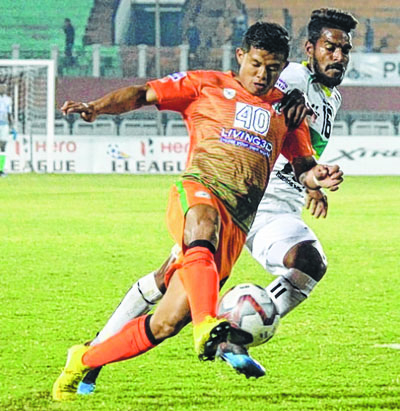 IMPHAL, Feb 8
NEROCA FC subdued a 10-man TRAU FC 5-0 in the return tie of the Imphal derby in the 2019-20 I-League at the Khuman Lampak Main Stadium, on Saturday.
TRAU defender Sandeep Singh's 18th-minute sending-off was eventually followed by a goal-fest in the second half with Philip Adjah (50'), Imran Khan (58') and Pritam Singh (60', 66', 90+1') on target.
Gift Raikhan made as many as four changes from his side that lost 4-1 against Churchill Brothers in Goa with Dhananjoy Singh, Jiteshwor Singh, Johnson Singh and Boubacar Diarra coming into the first team.
n the other hand, TRAU technical director Nandakumar Singh made two changes as Naocha Singh and suspended Denechandram Meitei made way for Robinson Singh and Tanmoy Ghosh.
Subash Singh and Adjah mounted early pressure on the TRAU defence with each of them getting close to scoring the opener before TRAU defender Sandeep stopped a lob with his hand and that called for a red card.
Diarra failed to get a connection on a measured delivery by Pritam from the right in the 29th minute while Subash and Imran ballooned their opportunities towards the end of the first half as the hosts failed to make the extra man count in the first half.
Despite being a man down, Nandakumar chose to go on the offensive by bringing in Nigerian attacker Joseph Olaleye at the break but it was Adjah who fired NEROCA into the lead in the 50th minute after he was found by Khan at the edge of the box.
By the hour mark, Raikhan's went 3-0 up as Khan converted a defence-splitting through ball by Jiteshwor and turned provider once again as Pritam rounded TRAU goalkeeper Mithun Samanta before calmly slotting the into the net.
Khan picked up his third assist of the evening and Pritam went on to complete his brace in the 66th minute. Pritam completed his hat-trick as he converted the rebound after Samanta's saved Adjah's shot in injury time.
The win put NEROCA level on points (11) with East Bengal, Aizawl FC and Chennai City to hot up the relegation battle while TRAU remain third with 15 points.             Agencies