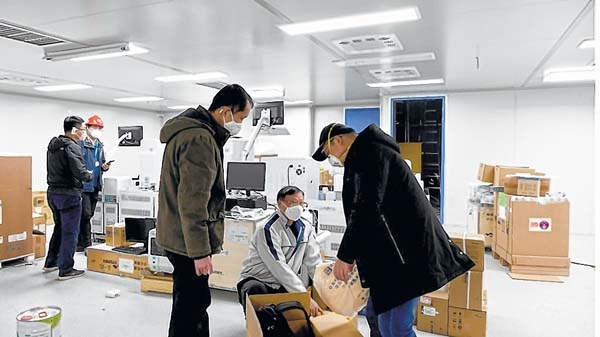 BEIJING, Feb 8
The number of deaths from China's coronavirus outbreak has risen to 722 on Saturday, surpassing the death toll from the SARS (severe acute respiratory syndrome) outbreak on the mainland and Hong Kong almost two decades ago.
The total number of infections across China has now reached 34,546.
The virus has also killed two people outside mainland China, one in Hong Kong and another in the Philippines, and at least 25 countries have confirmed cases.
On Friday, the death of 34-year-old Wuhan doctor, Li Wenliang, who sounded the alarm about the virus in December only to be punished, sparked an out- pouring of grief and anger over the Government's handling of the crisis.
The virus has prompted several Governments to ban arrivals from China and urge their citizens to avoid travelling to the country. Some have recommended that their citizens leave China.
Major airlines have suspended flights to and from China.
Japan: 3 more virus cases on ship, total now 64
The Health Ministry of Japan said three new virus cases had been confirmed on the Diamond Princess cruise ship docked in Yokohama, raising the total number to 64.
The ministry said of the three, two were Americans and one was a Chinese national.
By Saturday, tests were conducted on a total 279 passengers and crew members.
Malaysia confirms 16th coronavirus case
The Malaysian Health Ministry confirmed a 16th case of coronavirus, a 67-year old female and Chinese national from Wuhan.
Deputy Prime Minister Datuk Seri Dr Wan Azizah Wan Ismail said at a press briefing that the patient is the mother of a friend of the 14th patient who tested positive for the virus in Malaysia.
Wuhan opens second makeshift hospital to fight virus
Wuhan has opened another makeshift hospital, providing 1,500 beds, State media reported.
The first medical team has arrived at the Leishen-shan hospital in virus-hit city and patients will be admitted, State-run CCTV reported.
It said the hospital has 32 wards and a surgical operating room.
Thailand reports 7 new coronavirus cases - Health Ministry
Thailand's Public Health Ministry reported seven new cases of the coronavirus, including three Thais and four Chinese.
The new cases brought the total reported in the country to 32, among the world's highest number of infections outside of China.
"The seven new cases are all in hospital," said Suwan-nachai Wattanaying- charoenchai, director-general of the Disease Control Department.
One of the Thai cases was part of the group of 138 evacuated from China's coronavirus epicentre of Wuhan on Tuesday, Suwannachai told reporters.
Two more cases of coronavirus detected in UAE, total rises to 7 Two new cases of coronavirus infection have been detected in the United Arab Emirates, bringing the total number of people diagnosed with the disease to seven, the country's health ministry said on Twitter.
One of the two infected is a Filipino according to local Philippine media.
Panic buying in Singapore after virus alert raised
Anxious Singapore shoppers formed long lines at grocery stores and cleared the shelves of essential items, after the city-state raised its alert level over China's coronavirus outbreak.
Singapore, which has reported 33 cases, raised its alert level Friday to "orange", the same as during the deadly 2003 SARS outbreak. The alert level indicates that the virus is severe and passes easily between people.
The announcement triggered panic in the city-state of 5.7 million starting late Friday, with shoppers - many wearing masks - rushing to stock up on items including rice, noodles and toilet paper.
American dies of coronavirus in Wuhan; Japanese fatality also suspected of being infected
A US citizen has died from the new coronavirus at the epicentre of the epidemic in China, the US embassy said Saturday, in what appears to be the first confirmed foreign death from the outbreak.
"We can confirm that a 60-year-old US citizen diagnosed with coronavirus died at a hospital in Wuhan, China, on February 6," an embassy spokesman told AFP.
Meanwhile, the Japanese Foreign Ministry reported that a Japanese man "suspected of being infected" with the virus has also died in Wuhan, Kyodo News reported.
The man, in his 60s, had been hospitalised with severe pneumonia. He would be the first Japanese victim of the coronavirus outbreak if his infection is confirmed.
Three more coronavirus cases reported on the Diamond Princess cruise ship
Passengers on the cruise ship docked in Japan are facing more woes as government officials reported three more cases of coronavirus infection.
That brings to 64 the total number of infections on the Diamond Princess vessel, which was carrying 3,700 people.  Al Jazeera & agencies