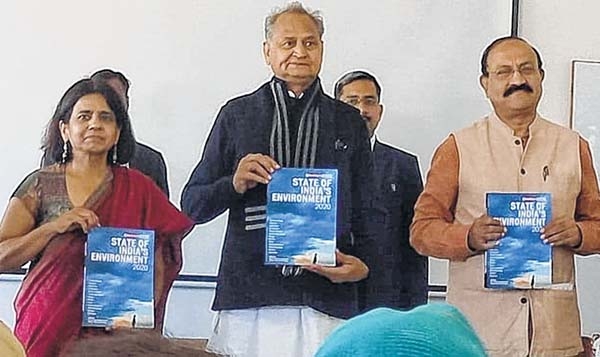 Mungchan Zimik
ALWAR (Rajasthan), Feb 9 : The three days CSE’s Annual Media Conclave on the state of India's environment and Anil Agarwal Dialogue 2020 was today inaugurated by Chief Minister of Rajasthan Ashok Gehlot at CSE's, AAETI campus in Nimli under Alwar district of Rajasthan.
CSE Director General Sunita Narain in her welcome speech said that CSE's objective of hosting the media dialogue as an annual event for the journalists writing on environmental issues is to “bring together journalists and writers interested in covering environment and development issues, with some of the country’s top experts who have been studying these issues, on to a common platform to discuss and understand the year’s most significant developments and concerns”.
Chief Minister of Rajasthan Ashok Gehlot who attended as the chief guest of the annual media conclave highlighted the initiative and the steps taken up by the Government of Rajasthan to take the State forward to a ‘Green’ movement.
He announced that Rajasthan will have a new environment policy–in which CSE’s inputs would be immensely helpful.
The CM further announced a solar and wind energy policy for the State, to make Rajasthan a solar power hub.
Gehlot was impressed by the AAETI campus CSE has built, and also mentioned about Sunita Narain who followed the same footsteps of late Anil Agarwal (the founder-director of CSE) who committed his life to environment for a better tomorrow.
The CM also released a book of CSE and Down to Earth magazine ‘India’s Environment Report 2020,’ and also witnessed an exhibition which showcased the ‘green’ features of AAETI within its premises.
The three days 2020 media conclave will have seven key sessions on climate change, air pollution and sustainable mobility, renewable energy, food, solid waste management, and forests and wildlife.
CSE will also release another report called Breathing Space, which is its latest publication focusing on air pollution in the country. Bhure Lal, Chairperson, Environment Pollution (Prevention and Control) Authority (EPCA), will unveil this report tomorrow.
Over 75 journalists from across India and 30 speakers are attending the conclave  at CSE’s AAETI campus in Nimli, Alwar.