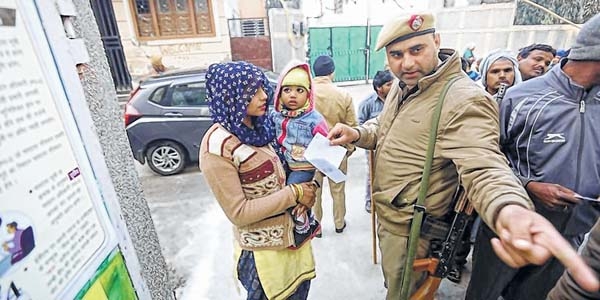 New Delhi, Feb 8
Nearly 57 per cent voter turn-out has been recorded till 6 pm Saturday as people of Delhi queued up to cast their votes for the Assembly election. The city recorded 14.75 per cent voter turnout in the first three hours of polling which began at 8 am. Voting officially concluded at 6 pm.
To ensure safe polling, the Delhi Police deployed at least 40,000 personnel, 19,000 Home Guards, and 190 companies of paramilitary forces across Delhi. Apart from this, the Delhi Police also set up checking drives and flying squads, along with patrolling on boats in the Yamuna. Special security arrangements have been made at the anti-Citizenship Amendment Act (CAA) protest sites like Shaheen Bagh with the help of volunteers. On Friday, at least three SHOs of South East district were stationed at Shaheen Bagh, and the layers of barricades leading up to the site were guarded by the paramilitary force.
The winning formula for the elections seems to be the tried and tested issues of ‘bijli, sadak, paani‘ as promises like free electricity and clean water have found re-sonance in the manifestos of all the three major parties — BJP, Congress, and AAP.
Besides power and water, reducing air pollution is another issue that has found priority in the manifestos. Agencies