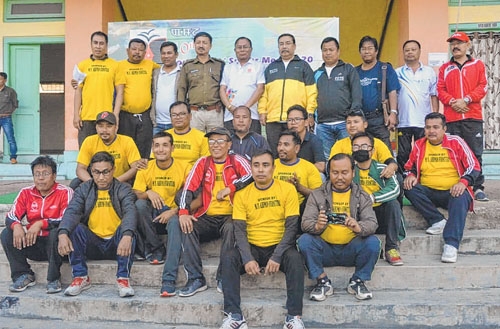 By Our Sports Reporter
IMPHAL, Mar 14 : The Sangai Express continued to stay unbeaten in Cricket as ISTV Network were crowned overall champions of the 10th Journalists' Sports Meet 2020 which was held  from March 8 to 12 at various stadiums under the aegis of All Manipur Working Journalists' Union..
ISTV Network earned the overall team champions title with a haul of 5 gold, 9 silver and 4 bronze medals at the sports meet while The Sangai Express were able to finish runners up with a collection of 5 gold and 3 silver medals.
Cricket : In the cricket final played at Luwangpokpa Cricket Stadium on March 12, The Sangai Express defeated ISTV Network by 10 wickets to remain unbeaten since 2018.
ISTV Network won the toss and posted a target of 40 runs losing 7 wickets in their quota of 8 overs.
Basanta shone in this innings with 3 wickets in his name while Ibobi managed two wickets in their spell of two overs each.
The Sangai Express which thrashed Poknapham in the semi-finals, chased downed the target with ease in 5.2 overs as Kishan struck 24 off 14 balls and experienced Ibobi gathered 16 runs off 12 balls.
7 media teams took part in this event.
Football: This years' football title went to Impact TV as they got the better of TOM TV by a slender 1-0 margin in the final on March 11 at Artificial Turf Ground, Khuman Lampak.
The goal worthy enough of a winner was scored by Ranachandra late in the 30th minute. 8 teams from different media houses took part in this tournament.
Volleyball : TOM TV were crowned the champions of the volleyball tournament of the sports meet held on March 9 at Khuman Lampak Outdoor Volleyball court.
TOM TV defeated Impact TV in straight sets in the final to win the top honour.
Athletics : Th Kishan of The Sangai Express took centre-stage at the athletic events of the Sports Meet held on March 9 at Khuman Lampak Main Stadium. He won 4 medals including three gold and a silver medal.
In the shot put event, Th Kishan managed a throw of 10.04 m to bag the first gold while ISTV's Binoy (9.39 m) and Gyaneshwor Y (8.81 m) finished second and third.
Kishan bagged the lone silver medal in the discus throw event as he recorded 26.59 m to finish second while ISTV's W Kumarjit earned the gold with a 27.25 m throw. Binoy N (25.30 m) of ISTV also won the bronze medal of the event.
Kishan then fetched gold medals in the 100 m (12.27 s) and 400 m (1:6.80) races for men.
ISTV's N Bipinchandra (5 m), L Arun (4.93 m) and W Kumarjit (4.90 m) leaped their best to win the gold, silver and bronze medals respectively in the long-jump event.
In the women's shot-put event, Roshimala of ISTV won the gold with a 7.19 m effort while her compatriots Babyta N (6.11 m) and Jayaluxmi Th (5.58 m) settled for the silver and the bronze medals respectively.
Babyta of ISTV on the other hand bagged a gold medal in the discus throw event as she recorded the best throw of 15.95 m while compatriot Roshimala Kh won the silver (15.31 m) as Impact TV's Th Rina grabbed the bronze medal (15.11 m).
L Ashapriya of TOM TV fetched the women's 100 m race gold with a time of 16.64 seconds while ISTV's Roshimala (16.96 s) and Impact TV's Victoria RK (17.33 s) finished second and third.
In the 400 m race, Victoria RK had the best time of 1 minute 36.02 seconds to win the gold while H Ronibala of Media Unified (1:39.50) and ISTV's Roshimala (1:55.36) finished second and third.
Roshimala of ISTV however leaped 3.25 m to win the gold and Impact TV's Victoria RK (3 m) and ISTV's Jayaluxmi (2.97 m) finished second and third.
Badminton : E Bormani of Media Unified clinched the men's badminton title while The Sangai Express' I Ibobi had to content with the silver medal.  Meanwhile TOM TV's Shanti Salam won the women's title beating Thingujam Rina of Impact TV in the final.
Table Tennis : I Ibobi of The Sangai Express earned the table tennis crown as he beat Takhellambam Lenindro of Hueiyen Lanpao in the final match. S Sonia of Poknapham on the other hand bagged the women's table tennis gold medal beating Correspondent's N Rina in the final.
Chess : In the chess event which was participated by 20 members from various media houses, E Bormani of Media Unified finished on top to win gold while The Sangai Express' I Ibobi finished second to win a silver medal.