Coronavirus cases rise to 114 in India 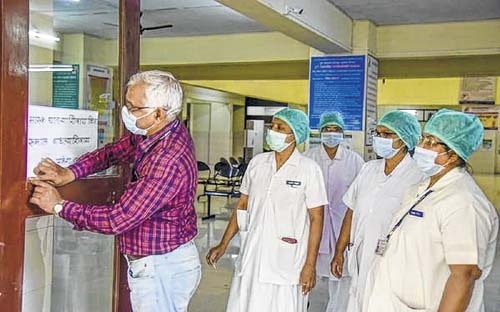 New Delhi, Mar 16
A total of 114 cases of coronavirus have been confirmed across India with four more testing positive for the virus on Monday, the Health Ministry has said. According to reports, the fresh cases emerge from Maharashtra, Kerala, Ladakh and Odisha. Ladakh had previously reported three cases.
India has reported two coronavirus deaths - one in Delhi and another one in Karnataka. So far, 13 patients have successfully recovered.
Sunday recorded the highest single-day increase in the number of cases in India with 25 people testing positive for coronavirus from across the country, 18 were in Maharashtra. The State has the highest num-ber of confirmed corona- virus cases with 32 confirmed patients followed by Kerala with 22 patients and Uttar Pradesh at 12 confirmed cases. Uttarakhand recorded its first positive case on Sunday.
Delhi has reported seven coronavirus cases while Karnataka has 6 cases so far.
Telangana has reported 3 cases while Jammu and Kashmir has reported two.
Andhra Pradesh, Punjab and Tamil Nadu have just one positive cases each, as per the Government data.
In the wake of the coro-navirus scare, many States have decided to keep schools and educational institutes shut till March 31.
Delhi Chief Minister Arvind Kejriwal on Monday invoked the Epidemic Diseases Act of 1897 to impose a complete ban on social, religious and political gatherings of more than 50 people in the national capital. Weddings are permitted, for now, said Kejriwal. But he appealed to people to put off the weddings also if they can.
“We have already shut schools, colleges, swimming pools so far. Today, it has been decided to order gyms, night clubs and spas also to close as a precautionary measure,” Kejriwal told a news conference after a review of the steps taken by the city Government to prevent community transmission of the infection.
Security authorities at the Parliament complex started thermal screening of visitors at all its entrances as a precautionary measure against Covid-19.
In the wake of rising coronavirus cases in the State, Maharashtra Chief Minister convened a review meeting. Hindustan Times