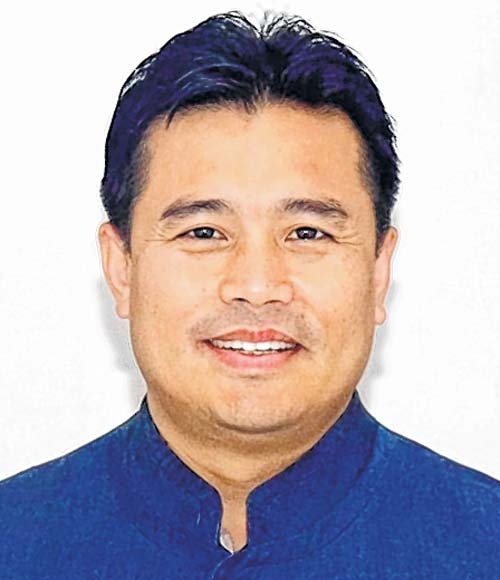 By Our Staff Reporter
IMPHAL, Mar 22 : On completion of three years in office by the BJP-led Government, Government spokesman Th Biswajit who also holds several key portfolios including Works, Power, RD& PR and IPR have congratulated all the people of the State.
Notably, the coalition Government completed three years on March 15.
He said that the Government has successfully taken up several development schemes and projects in such sectors as roads, power, health, education and agriculture.
Missions/schemes like Go to Hills, Go to Village, CMHT and School Phagathanshi are some major achievements of the Government. Meeyam gi Numit is another programme which has successfully bridged the gap that existed between people and the Government, Biswajit said.
There was a disconnect between hill people and plain people but the incumbent Government’s Go to Hills mission has effectively addressed this disconnect to a great extent, claimed the Government spokesman. He said that the Go to Village mission has delivered benefits of several welfare schemes at the doorsteps of beneficiaries. The mission facilitated prioritisation of inclusive development in the State. Saying that restoration of peace is the foremost prerequisite for bringing development in the State, Biswajit said that the State Government was unable to implement development projects effectively in the past on account of several issues.
However, the State has seen great changes with the formation of the incumbent Government. Cabinet meetings have been held at hill district headquarters and mutual trust has returned between hill people and plain people, he said.
With the coming of the NDA Government at the Centre, Imphal-Jiribam highway which remained a highway just for namesake  for decades has been finally developed as a standard highway. Moreover, development works of Imphal-Moreh highway and Imphal-Dimapur highway have been going on very smoothly, said the Works Minister. Transport infrastructure have been improved in hill districts too as a result of additional investment by the incumbent Government.
Saying that the volume of traffic grows two time every four years, Biswajit said that construction of Imphal ring road would begin this year in order to address the ever worsening traffic problems. The Government has also been working to construct elevated highways with financial assistance from the Asian Development Bank (ADB). Once these elevated highways are constructed, there would be separate roads leading to Imphal airport and Sekmai, Biswajit said.
From 2001 to 2015, sanctions were made for construction of 1543 roads under PMGSY Phase I to IX.  From 2017-18 to 2019-20, sanctions were made for construction of 458 roads, Biswajit informed.
He went on to claim that Manipur is a frontrunner among all the North Eastern States in terms of implementing PMGSY most effectively. As such, after successful implementation of PMGSY Batch I, the State has qualified for implementation of Batch II and Batch III. Apart from rural roads, the scope has now been expanded to cover ODRs, MDRs and as well as other roads leading to SDO/SDC offices, schools, colleges and other key Government offices, Biswajit who also holds the RD&PR portfolio said. Under DDUGKY, boys and girls who have completed Class X and Class XII are being trained for different jobs like air hostess, hotel management etc  and they are also given the benefit of job placement, Biswajit continued.
He said that a total of 24 hospitals (17 public hospitals and 7 private hospitals including Narayana Super Speciality Hospital, Guwahati have been empanelled under CMHT.