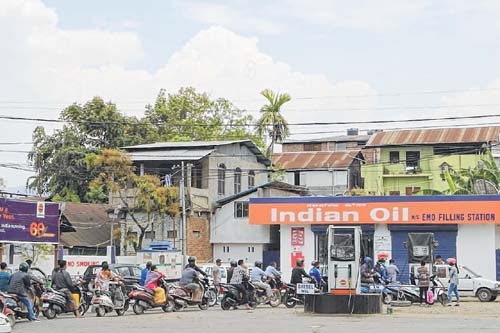 By Our Staff Reporter
IMPHAL, Mar 23: A day after India observed a 14 hour long Janata Curfew in an attempt to break the chain of COVID-19 transmission, long queue of people could be seen at the major oil pumps across Imphal city.
Even though the Government has put restrictions on gathering of more than 4 people at a time, people still flocked the oil pumps in droves.
Some oil pumps were found closed but women could be seen selling fuel in bottles in front of those oil pumps.
The people who came to buy petrol at the oil pumps,  explained to The Sangai Express that they came rushing to buy fuel as they are afraid that the oil pumps will close down and there will be no more fuel available if oil carrying trucks and tankers cannot reach the State due to the lockdown.
Some of the customers further explained that they joined in the queue after panicking as they saw many oil pumps closed and large number of people lining up to buy petrol in those still open oil pumps.
However, in complete contrast, the oil pump workers told the paper that for now, there is no news regarding any lockdown on distribution of fuel.
The pumps will supply the fuel as long as stocks last and moreover, oil tankers are still coming on time bringing the much needed fuel, they said.
On the other hand, following the Janata Curfew called by PM Modi yesterday, people of Lamlai Kendra, Imphal East, flocked grocery stores at Yaingangpokpi Bazaar early today morning.
Although many shops and grocery stores were opened in the morning, only a few small shops remained opened by the time evening came.