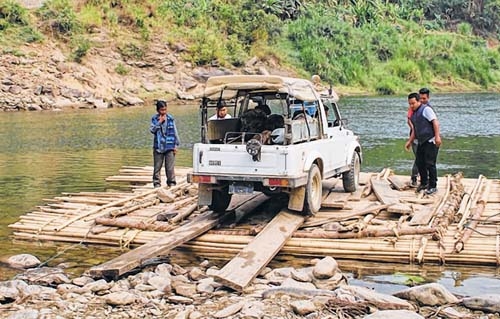 By Our Staff Reporter
IMPHAL, Mar 23: Even as Power Minister Th Biswajit claimed on the floor of the State Assembly that Sanvon and Rovakot villages of Pherzawl district had been electrified, electricity is still not available in the two villages.
Although Parbung has been electrified, power supply in the area is quite irregular whereas power connection in Lungthulien is restricted to rich people with poor families denied the same facility.
A team of media persons visited several villages of Pherzawl district recently to make a field assessment of their pace of development and identify common as well as specific grievances of each village.
Electricity available at Pherzawl district headquarters is supplied from the Thanlon power sub-centre.
As the media team was putting up at Pherzawl district headquarters, the power supply was cut off and it was not restored till the next day.
Local villagers alleged that the power supply to Pherzawl and Parbung was cut off by officials deliberately.
Although there are offices of DC, SP and ADC as well as a guest house at Pherzawl district headquarters, there are no employees.  Most offices and quarters remain locked.
Both the DC and the SP came to the district headquarters on Independence Day and Republic Day and they went back after hoisting the National flag, said the villagers.
In the absence of any banking facility, people have to go to Churachandpur for old age pension, Anganwadi honorarium and benefits of several welfare schemes which entails lots of inconvenience and wastage of time.
People have been fetching water from far off places in vehicles as there is no water supply plant, conveyed the villagers.
There is only one PHSC at the district headquarters. As the PHSC is not functioning properly, it is being occupied by NHIDCL employees who are engaged in road construction work.
The villagers expressed keen desire for the DC and the SP to station themselves at the district headquarters so that they can discharge their official duties effectively.
Dismissing the claim of the Power Minister that Sanvon village has been electrified, some leaders of the village said that there are power lines but no power has been ever supplied on these lines.
Saying that they have been facing another problem of bad road infrastructure, the village leaders urged the Government to address their grievances at the earliest.
Last year each household of Sanvon got 10 Kgs of rice under NFSA but this year it has been reduced to 7 Kgs.
There is a Government High School but only Chowkidar is looking after it without any teacher or staff, said the villagers.
Talking about the grievances and wishes of the villagers, Tipaimukh AC MLA and Public Account Committee Chairman Dr Chaltonlien Amo said that people of Pherzawl district are being denied benefits and shares of several Government schemes and projects as most Government offices are not functioning properly notwithstanding the fact there are enough offices/quarters for DC, SP and ADC.
Saying that officials might have faced many difficulties to station themselves at Pherzawl district headquarters for long on account of lack of health and water supply facilities, Chaltonlien asked as to why  officials cannot stay there while villagers have been living there all along.
Income certificates as well as birth certificates should be issued at the district headquarters. Pointing out that bank accounts have  become indispensable, the MLA urged the Government to open banking facility at the district headquarters.
He also expressed keen desire for setting up a district hospital as Pherzawl is now a separate district.
“I raised all major issues of Sanvon like lack of power supply, pathetic condition of roads, absence of water supply facility, shortage of medical staff, shortage of teaching staff etc in the State Assembly repeatedly”, Dr Chaltonlien said.
He then contradicted the Power Minister’s claim clarifying that there are power lines in Sanvon but no power has been ever supplied on them.
Saying that he has been facing severe remonstration from villagers because of lack of development activities, Dr Chaltonlien asserted that the villagers were also chiding the Government when they rebuked him.
He then urged the Government to ensure that power supply is available at Sanvon which is inhabited by around 600 families.
Pointing out that the proposed bridge over Barak River would connect Parbung and Vangai Range sub-division with Jiribam, the MLA asserted that the bridge would be a key link between Imphal-Jiribam highway and Jiri-Tipaimukh road.
He also urged the Government to complete the bridge construction before the onset of monsoon season.