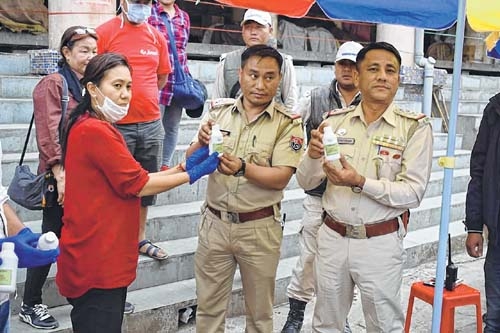 IMPHAL, Mar 23
In the backdrop of COVID-19 scare looming in the State and the scarcity of hand sanitisers in the local market, Scientists and staff of the Institute of Bioresources and Sustainable Development (IBSD) Imphal distributed around 200 bottles of alcohol based hand sanitisers, for free, to personnel of city police station, media persons and workers of Imphal Municipal Council at Khwairamband Keithel today.
A press release issued by senior administrative officer, IBSD Imphal  stated that the hand sanitisers was prepared under the guidelines of WHO.
Saying that sanitisers were also distributed among the  staff of the institute, it added that the initiative was taken up under the guidance of Director of Institute.
On the other hand, hand sanitisers, which were manufactured under the guidance of the Birmangol College's Biotech Hub coordinator as well as HoD of Zoology Department, N Mirabai, were also distributed to the teaching and non-teaching staff of the College, Sawombung and locals of the area.