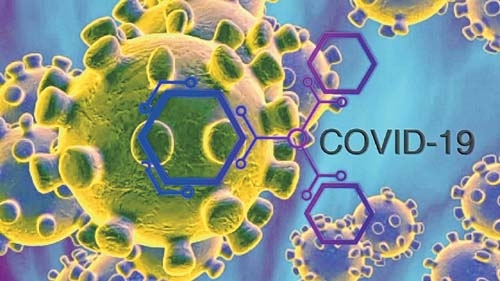 New Delhi, Mar 24
India might end up with 97,000 to 1.3 million coronavirus disease (Covid-19) infections by mid-May, according to a statistical analysis of current trends and the country’s demographics that raises the possibility of the country being unable to avoid widespread deaths if its frail health care system is overwhelmed by the outbreak.
Created by a team including 13 academics from three American universities and one from the Delhi School of Economics, the projection is based on cases reported till March 22 and underscores the need for the Government to immediately ramp up efforts such as building dedicated new hospitals as China did in Wuhan.
“By May 15, we estimate between 97,000 and 1.3 million people may be infected across India,” said Bhramar Mukherjee, chair of biostatistics at the University of Michigan School of Public Health, and one of the authors of the report, “Predictions and role of interventions for Covid-19 outbreak in India”.
The assessment is based on daily case data from the 2019 Novel Coronavirus Visual Dashboard operated by the Johns Hopkins University Center for Systems Science and Engineering.
The trend, according to the researchers,will depend on how strong India’s interventions are to stop the new coronavirus (Sars-Cov-2) from spreading further in the country, where at least 400 people in 22 States have already been sickened.
“Current estimates are at best underestimates for India based on early phase data, given the low frequency and scale of testing in India,” says the report, adding that the predicted surge in cases will make it “impossible for health care providers to support the sheer volume of cases. India has the most over- stretched health care system where it is hard to provide care in times of normal patient volume”.
According to the report, India has 0.7 hospital beds for every 100,000 people – far fewer than South Korea’s six per 100,000. South Korea, seen as one of the countries that has been successful in responding to the epidemic, has also mounted a widespread testing programme that covered tens of thousands of people in the initial weeks.
The report also flags the vast proportion of vulnerable Indians who suffer from non-communicable diseases such as hypertension and diabetes as a factor that could make the outbreak serious in India. “All the susceptibility factors that have been identified for people to be at higher risk for hospitalisations are more prevalent in India. And India has far fewer number of hospital beds for its population than the United States or South Korea,” Mukherjee said.
This, she added, makes the concept of “flattening of the curve” difficult for India. Flattening the curve refers to keeping number of infections suppressed to levels that will allow existing health care system to be able to give care.
In the US, several hospitals have in the last week reported to have run out of beds for new patients, leaving many without the critical care they need to be able to survive.
To get ahead of the problem, Mukherjee and her colleagues suggest immediate ramping up of efforts by the government. “The effect of severe intervention is quite palpable – as seen in China that effectively contained most of the infection to Hubei. There are two stages to the strategy we see: in early phase, you can go for large scale testing to identify the spread of the disease,” she said on the phone.
The second phase is when community spread begins, “when you are unable to trace every contact, you have to shift your focus to building health care facility”.
“You have to think of creative strategies, not just to tackle the initial surge but also manage the pandemic over the next months or even the years that it could last,” said Mukherjee, citing experiments such as the one in China where people were allowed to go out in a lottery-based permissions system.
In the longer term, policy makers will need to think about economic as well as the societal implications from the crisis, which has led to a situation in which entire cities, industries and the mammoth railways network have been shut down for the first time.
“The interventions need to be paired with incentives so that people are encouraged to follow restrictions. Because let us remember the mortality rate is not in itself very high, and we must be wary of triggering mass panic and anxiety that could lead to other psychosocial and economic problems,” said Mukherjee.
The report also covers speculation that the following summer months could help stem the disease’s spread – a notion the scientists said did not hold up to statistical scrutiny.
“Let’s also remember that every flu has two seasons. One early in the spring and a return in the fall. Even if it dies down in summer, it will likely come back, so we have to be prepared at least for a couple of years till we get herd immunity or a vaccine,” said Mukherjee.
For now, the report emphasises the need to increase testing so that there is a better baseline data for epidemiological projections – a process that takes into account a number of positive as well as negative cases, in addition to demographic distribution and the pathogen’s observed rate of spread.
The authors:
The report was prepared by the Crisis of Virus in India (COV-IND) study group. The 14-member group includes epidemiology and biostatistics experts from Johns Hopkins University, University of Michigan, University of Connecticut and the Delhi School of Economics.
The process:
The authors say they use standard epidemiologic tools of modeling disease transmission, taking into account the numbers of susceptible, infected and recovered persons. Real-time daily case data is sourced from the Johns Hopkins dashboard to track the Covid-19 pandemic. Hindustan Times