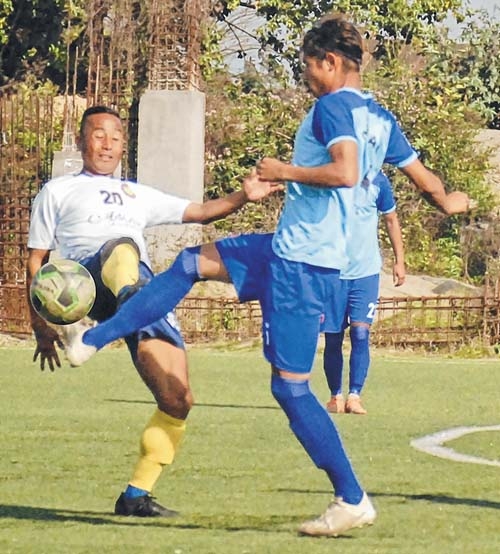 By Our Sports Reporter
IMPHAL, Mar 2 : NACO, Nambul Mapal sealed a slender 1-0 win against DM RAO, Sekmai today at Artificial Turf Ground, Khuman Lampak to rise from 9th to 7th on 10 points in the league table of the ongoing 13th Manipur State League.
It was the third win for NACO after they went down 0-1 to YUFC on February 28 and it was the fifth straight loss for DM RAO to remain at rockbottom in the table of the 15 team tournament organised by All Manipur Football Association.
Although, DM RAO are yet to open up their account at the tournament, they showed a bit improved side today playing at par with NACO, Nambul Mapal.  But their jinx continued as they squandered a penalty in the latter half to lose a chance to draw level and earn first point.
DM RAO also had to see an attempt hit the bar early on before S Kullarson Anal converted a fine chance for NACO  in the 24th minute. It was a brilliant finish from NACO after DM RAO missed their chance, as Ng Rahul provided U-21 striker, S Kullarson Anal a fine pass near the edge and the latter did not find it hard to beat the Sekmai side keeper.
After trailing 1-0 behind NACO till the break, DM RAO showed no sign of slackening and created chances at times to keep NACO under pressure. They also went close into NACO's goal mouth on few occasions but failed to capitalise on their chances. DM lately had their chance to equalise in the 82nd minute as the referee awarded them a penalty after Rangam S was brought down inside the penalty box by NACO defender L Rocky but H Gungoon who stepped up to take the shot missed the target giving up the closest chance.
With the missed chance, DM RAO's hope of drawing level came to end as NACO cruised home 1-0 for the third win.
GSC, Churachandpur will play KLASA, Keinou in the next match of the tournament at 11.45 pm before Muvanlai Athletics face YPHU, Lalambung latter at 2 pm.