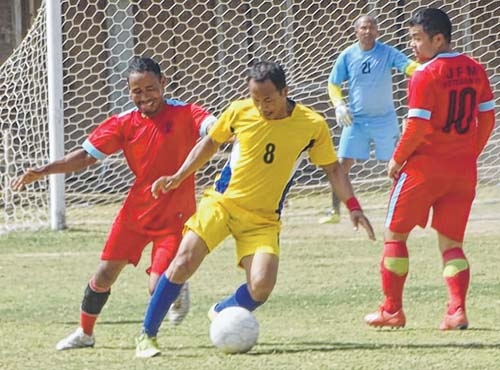 By Our Sports Reporter
IMPHAL, Mar 2 : TBSFA-B posted a convincing 3-0 win against IEVSA in today's match of the Koijam Yaima Memorial Veteran Football Tournament being organised by Akampat Veteran Football Association at XI Star Sporting Union Ground, Akampat.
The game also marked the end of the league stage and TBSFA-B will be facing off with FLAM in the quarter final on March 4.
The last  league match of the tournament saw TBSFA-B dominating the game right from the beginning and took a commanding 2-0 lead with Bimolkumar scoring adding the team's first in the first minute itself and Binanta finding the target at the stroke of the halftime. Boicha then sealed off the game 3-0 with another goal during the stoppage time as IEVSA's effort to grab a consolation goal did not yield result.
UVSA-A will play AYVFA in the first quarter final match at 1 pm tomorrow while TBSFA-A will meet KVFA in the next quarter final match latter at 2.30 pm.