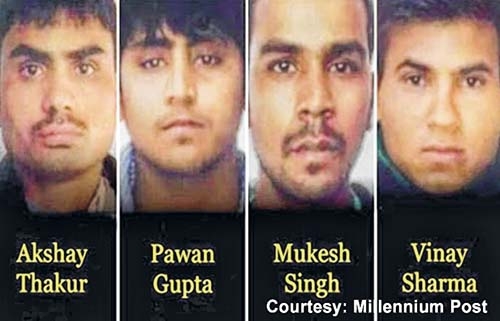 New Delhi, Mar 2
Four men convicted in the rape and fatal assault on a 23-year-old medical student in Delhi in 2012 won't be hanged tomorrow as scheduled, a Judge in Delhi said today.
With the mercy petition of one of the convicts still pending with President Ram Nath Kovind, the rapists have not exhausted all their legal options, the Judge ruled.
For weeks, Akshay Thakur, 31, Pawan Gupta, 25, Vinay Sharma, 26, and Mukesh Singh, 32, have been filing staggered petitions challenging their death sentence in an effort to stall the execution.
Six men, including one just short of 18, were arrested after the 2012 gang rape of a young woman on a moving bus. One of the main accused, Ram Singh, was found hanging in his jail cell. The teen was released after three years in a reform home.
On December 16, 2012, the medical student who came to be known as "Nirbhaya", was fooled into boarding a bus, assaulted and tortured so brutally that she died days later, triggering an unprecedented outpouring of public anger over crimes against women.
"She was savagely raped and thrown on the streets. Her intestines were ripped out. And all these Courts are sitting and watching a tamasha," Nirbhaya's distraught mother said outside the Court.
Nirbhaya's lawyer slammed the system after the order.
"Can't the Court understand the manipulation of law ? Our system is completely rotten. It takes years to get justice. We have to fix it collectively," Seema Kushwaha, the prosecution lawyer said.
NDTV