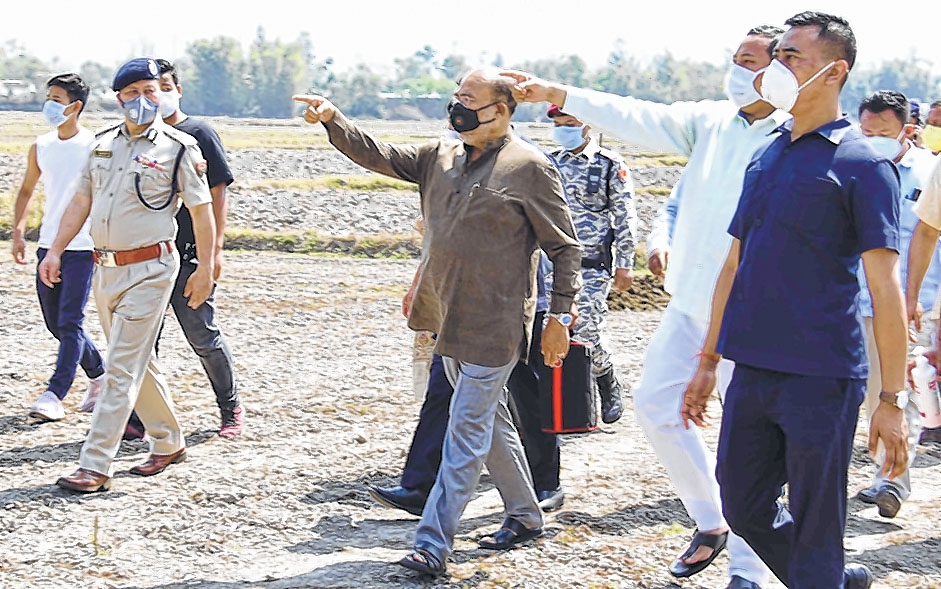 Imphal, Mar 30 (DIPR)
The State Government is setting up a new 200-bedded quarantine centre within 10-15 days at Langthabal Phumlou Loukon in Imphal West District as part of the immediate measures taken up to tackle spread of COVID-19 pandemic. The new centre is to be set up in addition to the existing centres being opened in different districts of the State.
Chief Minister N Biren Singh along with some MLAs and high ranking officials of the State Govern- ment inspected the site today. The centre would be constructed in one pari (around one hectare) of land. Half of the land would be donated by the land owner while another half would be bought from him by the Government as per the existing land price. A Government hospital would be developed on the land after the epidemic is contained.
The Chief Minister instructed the officials con- cerned to complete construction of the centre within 10 to 15 days. He also instructed the Imphal West DC to begin survey of the land immediately.
The Chief Minister’s retinue included Khurai AC MLA L Susindro, Yaiskul AC MLA Th Satyabrata, Chief Secretary Dr J Suresh Babu, DGP LM Khaute, Principal Secretary (Health) V Vumlunmang, Manipur Police Housing Corporation Ltd Managing Director C Doungel, Health Services Director Dr K Rajo, JNIMS Director Dr Th Bhimo and other high ranking officials of the State Government.
It may be mentioned that different quarantine centres have already been opened in almost all the districts of the State to accommodate those who have returned from affected States and countries.
Powered By Sangraha 9.0