I League 2019-20: TRAU FC do the double over Churchill Brothers 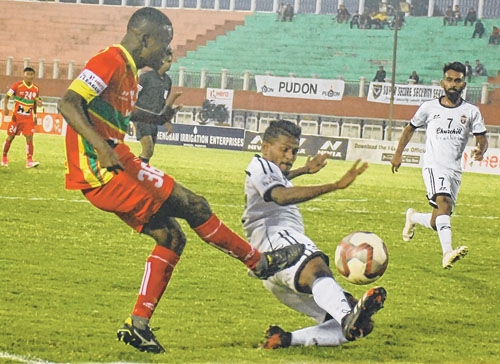 IMPHAL, Mar 4
TRAU FC rode on a 77th minute penalty converted by Oguchi Uche to defeat Churchill Brothers, whom they defeated 2-1 in Goa, at the Khuman Lampak Main Stadium in Imphal, Manipur, on Wednesday.
The victory put the I-League newbies, with 19 points from 16 games, on par with Gokulam Kerala and Chennai City on the standings table and just a point below East Bengal and Churchill Brothers who are both locked at 20 points.
Nandakumar Singh made a host of changes for the hosts who suffered a 3-1 defeat against Mohun Bagan over the weekend. New signing in Moldovian forward Petru Leuca was included for the tie whiel Mithun Samanta, Tanmoy Ghosh, Krishnananda Singh and Princewell Emeka made it back to the first 11.
Bernardo Tavares, meanwhile, named an unchanged XI after a 1-1 draw against East Bengal in their last outing.
Willis Plaza had the best opportunity in the fifth minute after TRAU were forced to defend off a few consecutive corners taken by Quan Gomes, one of those that landed in the path of the Trinidadian after a goalmouth melee but the former East Bengal forward ballooned it over from close range.
Socrates Pedro curled wide his attempt in the three minutes of added time, while the hosts failed to create any chances of note as both sides were locked goalless at half-time. Two minutes in the second half, Netrajit Singh's shot from distance off a loose ball from Gomes come off the top right corner of the woodwork before Plaza mistimed his header against an inch-perfect cross in the box by Lalkhawmapuia in the 52nd minute.
Leuca attempted a few ambitious shots off target for his first appearance on Indian soil but it was a suicidal backpass by Robert Primus later in the second half that allowed the home side to pull ahead.
Churchill goalkeeper James Kithan took too long to clear the ball past Emeka as Joseph Olaleye was at hand to pick the remains in the box before the Nigerian was brought down by Primus. Uche converted the resultant penalty in the 77th minute that turned out to be the eventual match-winner.
It was an own goal by Churchill goalkeeper Jafar Mondal that handed the Red Machines a defeat against TRAU in Goa and an own goal could have handed them a point in Imphal as Gerard Williams headed back the ball to his goalkeeper who was off his line deep into injury time. However, Ghosh was in the right place to prevent the ball from entering the net.
Agencies