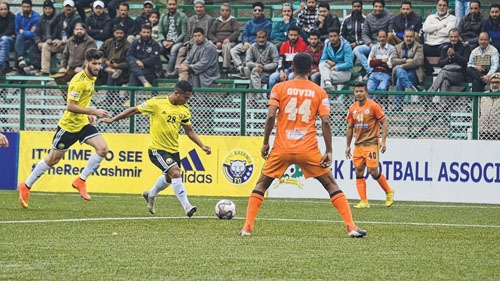 SRINAGAR, Mar 4
Danish Farooq’s 42nd minute strike helped Real Kashmir FC beat NEROCA FC 1-0 in an I-League 2019-20 clash at the TRC Turf Ground in Srinagar, on Wednesday.
The Snow Leopards, now have 22 points from 14 matches, climbed up to the third position on the league table. NEROCA, on the other hand, remain 10th with 15 points from 15 matches.
David Robertson made just one change in the Real Kashmir starting 11 as Chesterpaul Lyngdoh replaced Ritwik Kumar Das on the right flank, Whereas Gift Raikhan made three changes in the NEROCA lineup to include Ronald Singh, Zodingliana Ralte and Chanso Horam in place of Dhananjoy Singh, Jiteshwor Singh and Subhash Singh.
The match got off to a scrappy start as both teams played wayward football right from the beginning. There was a bit of drama in the 11th minute of the match when Ousamane Diawara was sent off after he accidentally kicked his own teammate Zodingliana on the chest.
After vehement protests from the NEROCA players, the referee consulted with his assistants before deciding to overturn his decision and flashed a yellow card instead.
Farooq then broke the deadlock in 42nd minute when he found the back of the net with a clinical header of Chesterpaul Lyngdoh’s cross.
The hosts came close to double their lead twice towards the end of the first half. Kallum Higginbotham failed to keep his shot on target after picking a loose ball from Diawara before Farooq's attempt to lob the ball above Bishorjit Singh saw the NEROCA goalkeeper do well to stop the ball from going in.
eal Kashmir continued to dominate proceedings in the second half and got quite a few chances to score an insurance goal but could not find the back of the net. The visitors lacked the urgency even though they were a goal down. Goal.com