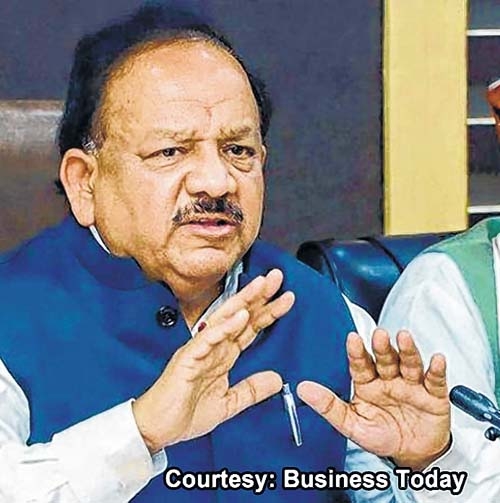 Bengaluru, Chennai, Hyderabad, New Delhi, Mar 4
With 23 more novel coronavirus cases confirmed in the country on Wednesday, taking the total number of infections to 28 so far, Union Minister Prakash Javadekar said the Government was proactively engaged in dealing with COVID-19 and Prime Minister Narendra Modi was monitoring situation daily.
Giving a breakdown of the number of cases, Union Health Minister Harsh Vadhan said, “A total of 28 COVID-19 cases have been detected in India so far. Among them, one person was from Delhi, six of his relatives in Agra, 16 Italians and their Indian driver, one in Telangana and the three earlier cases in Kerala.” Vardhan also said 27,000 people had been placed under community surveillance.
Over 3,000 people have died of coronavirus worldwide, while some 90,000 people have been infected.
Meanwhile, responding to a question in Lok Sabha, Minister of State for External Affairs V Muraleedharan said 17 Indians had been infected with coronavirus abroad — 16 cases were reported from Japan on the cruise ship and one from the UAE.
“Air India has raised a bill of Rs 5.98 crore for operating two special flights to China and an Indian Air Force flight carrying relief material to China also carried Indian citizens from Wuhan, China on its return journey,” he said.
Two more cases of coronavirus suspected in Hyderabad : In Telangana, where a 24-year-old software professional tested positive for coronavirus on Sunday, two new suspected cases were reported in Hyderabad. The duo tested positive in the first round at Gandhi Hospital and their samples have been sent for the second round of testing to the National Institute of Virology, Pune.
Officials said that of the two new suspected cases, one person traveled to Italy recently on business. The second person traveled with the 24-year-old techie who tested positive on Sunday.
Meanwhile, thousands of employees working for different companies in a building in Hyderabad were seen fleeing the place on Wednesday morning after reports emerged that one among them tested positive for Covid-2019. At 11.15 am, about 2500 employees started rushing out of the building as soon as messages started doing the rounds on various Whatsapp groups.
Speaking to indianexpress.com, Krishna Yedula, president of Society for Cyberabad Security Council (SCSC), said, “It is quite natural with so much of population in IT that news spreads faster and people panic quickly. The situation does not demand that kind of panic as the issue is very localised to one company and that floor in the building. The management will carry out fumigation on the floor.”
“The company where the victim works has released an internal communication and somehow that got forwarded to many groups, creating panic. Had it been kept internal, so much of panic would not have generated,” Yedula said.
In Assam, 55 people under coronavirus surveillance : Coming to the North East, about 55 people who entered Assam from China, Thailand and Singapore have been kept under surveillance for 28 days, the Health Ministry confirmed even though it said none have been infected.
“Two out of the 55 who had come from China reported symptoms of fever and cold, so we kept them in the isolation ward of Assam Medical College, Dibrugarh and Gauhati Medical College and Hospital (GMCH). Both have tested negative for the virus. One more person had come in from Kerala with symptoms of fever. After being kept in isolation in GMCH for the past twenty days, the person tested negative,” said Pijush Hazarika, Minister of State for Health and Family Welfare.
Coronavirus in India: Govt measures
The Government has made it mandatory for international passengers to submit a self-declaration form on arrival, which collects personal data including travel history and possible contact with over people there.
Regular visas and e-visas issued to Nationals of Italy, Iran, South Korea, and Japan on or before March 3 — who have not entered India yet — have been suspended.
Thermal screening has been set up at airports across the country; it is compulsory for passengers arriving via flights from Italy, Iran, China, Hong Kong, Japan, South Korea, Thailand, Singapore, Nepal, Indonesia, Vietnam and Malaysia.
PM Modi to skip Holi celebrations due to coronavirus outbreak
Prime Minister Narendra Modi Wednesday said he would skip Holi celebrations this year in the wake of the coronavirus outbreak. He said he would not participate as experts across the world have advised to “reduce mass gatherings” to avoid the spread of the disease.
A day earlier, Modi had said he conducted “an extensive review regarding preparedness”, and that “there is no need to panic”.
He also tweeted a 24×7 helpline number (+91 1123978046) and email ID ([email protected]) to report any suspected cases and to seek further help.  We called this number, and here’s what happened
Are hand sanitisers effective ?
They are, provided they are alcohol-based and the alcohol content is more than 60%. The US Centers for Disease Control “recommends washing hands with soap and water whenever possible because handwashing reduces the amounts of all types of germs and chemicals on hands. But if soap and water are not available, using a hand sanitizer with at least 60% alcohol can help you avoid getting sick and spreading germs to others.” Hand-washing, though, remains the first and best step, preferably with warm water.   The Indian Express