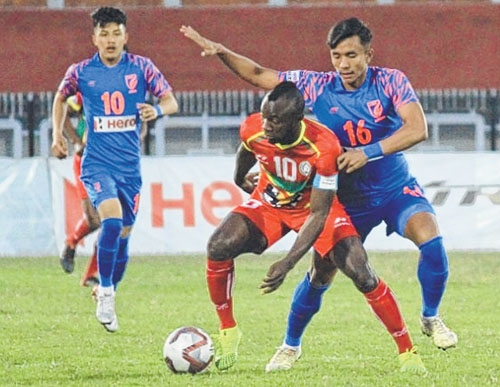 IMPHAL, Mar 8
TRAU FC edged out Indian Arrows 1-0 in an I-League 2019-20 clash on Sunday at the Khuman Lampak Stadium in Imphal.
Deepak Devrani scored the only goal of the match with a brilliant back-volley in the 89th minute to seal crucial three points for his side at home.
The Imphal-based club climbed up to the fourth position on the league table with 22 points from 17 matches while Indian Arrows continue to be at the bottom position with nine points from 16 matches.
Nandakumar Singh Made three changes in the TRAU lineup as Jedidi Haokip,  Robinson Singh and Loken Meitei replaced Mithun Samanta, Krishnanda Singh, and Petru Leuca.
Whereas his opposite number Venkatesh Shanmugam too made three changes in Arrows starting eleven as Bikash Yumnam, RV Hormipam and Suranjit Singh came in place of Saurabh Meher, Hendry Antonay and Gurkirat Singh.
The game got off to a very scrappy start with neither team creating any positive move in the attacking third. TRAU ended the first half with more ball possession but little to show for their efforts in front of goal.
They started the second half in the same vein and came close to break the deadlock in the 49th minute. Joseph Olaleye received a cross from Loken Meitei inside the box and attempted a shot from close range but failed to keep the ball on target.
Indian Arrows took control of the game in the final quarter of the match after Venkatesh had threw in Vikram Pratap Singh in place of T. Suranjit Singh.
The India colts missed arguably the easiest chance of the match in the 77th minute when Nikhil Raj failed to convert a simple tap-in into an empty goal.
Vikram Pratap initiated the move from the right flank and sent an inch-perfect ball inside the box. Raj had to just push the ball into the net but he failed to get a touch of the ball from a handshaking distance.
TRAU made the most of the profligacy of their opposition and scored the opener and the eventual-winner in the 89th minute thanks to a world-class goal from Deepak Devrani. The move started with Tanmoy Ghosh's throw-in which Uche intercepted and sent it back to the defender. Ghosh sent a cross in the second attempt which Akash Mishra unconvincingly cleared. Devrani attempted a back-volley from the rebound ball and found the back of the net to seal the three points.             Goal.com