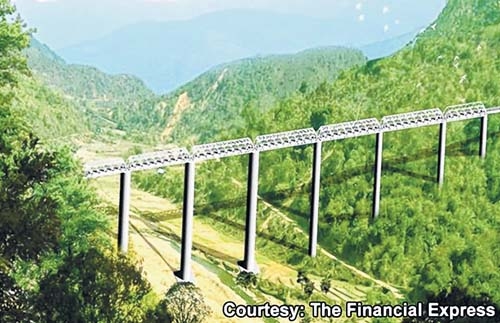 NEW DELHI, Apr 28
Declared as a National project, the Jiribam-Imphal railway line project completed the launching of all its girders on a 555 m long and 100 m tall rail bridge over Makru river in Manipur, the Ministry of Railways tweeted. It is to note that this project has been one of the major works undertaken by Indian Railways as it will connect Manipur to the rest of the country via the Indian Railways network. Informing about the recent completion of the girder bridge, the Government said that apart from better connectivity, the Jiribam-Imphal rail line will also improve the economic scenario of the State.
The project awarded in the year 2008 has a budget of Rs 13,809 crore and the line is expected to be completed by March 2022. Recently, the Railway Ministry had informed that the Open Web Girder of Bridge Number 44, was launched on February 14 this year. One big highlight of the Jiribam-Imphal railway line project is that it will have India’s tallest girder rail bridge. The bridge will have a pier height of 141 metres, which is twice the height of Delhi’s Qutub Minar.
The alignment of the railway line passes through a number of deep gorges and also crosses a few rivers. Therefore, the Ministry will be making 52 tunnels along with 149 bridges for the railway line as a necessary means, the Chief Engineer for construction of Jiribam-Imphal rail line told Financial Express Online in an earlier interaction. Apart from this, 10 railway stations will be constructed in order to maintain a suitable gradient for efficiency in railway operations.
The project that will connect the capital city of Imphal in Manipur with the broad gauge network was earlier slated to be completed in 2020.
Meanwhile, the National project will also be supported by Indian Institute of Technology (IIT). Three IITs in India- IIT Kanpur, IIT Roorkee and IIT Guwahati will be providing technical support to this railway project. They have been proof-checking the designs and helped construction of the bridge remain cost-efficient as well as sustainable.
Financial Express