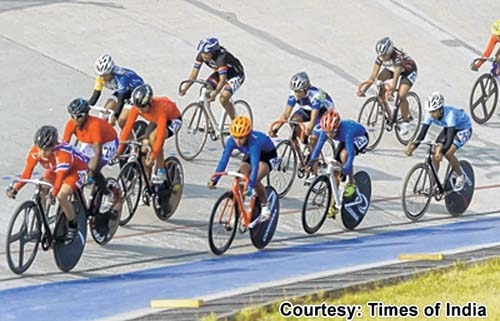 NEW DELHI, May 2
Due to the National capital turning into a COVID-19 hotspot, certain sports federations are thinking of not having any camp or other activity here. The Cycling Federation of India (CFI) is planning to shift the National camp to a safer zone, with Manipur being a likely option. However, this will not be a permanent move as the facilities at the Indira Gandhi Indoor Stadium are far superior compared to the rest of the country.
The CFI has held numerous discussions since February regarding this. Most in the core group of cyclists hail from either Manipur or Andaman and Nicobar Islands. Even they have requested the federation to shift the camp at the earliest as they are losing out on practice. “Manipur has a lot of advantages. Very few cases (two) have been recorded there and also there is absolutely no pollution, which is a bonus. As quite a few cyclists are already there, it would be easier for the shift to happen. I have spoken to the Sports Ministry as well as the Manipur Government. We are hoping for a positive response this month itself,” CFI chairman Onkar Singh told this daily.
The Khuman Lampak Stadium in Imphal has an outdoor track which is in good condition. Also, training in Imphal will not be a problem in summer or during Diwali and winter when pollution is at its peak in Delhi. However, no training will be possible in Manipur during the rainy season.
This plan was in the pipeline due to repair works needed on the IG velodrome roof. But the pandemic has put paid to those plans. “We had discussed the possibility due to the roof requiring extensive work. It was to be done in the summer and we would have trained elsewhere. But now, that is also not possible,” the chairman added.
However, even if the shift happens, it will not be a permanent one as the CFI has plans to send the core group for training abroad. “Most races are in Europe and we want them to train there for most of the year. We are in advanced discussions with the Government. When they come back to the country, they can train in Delhi where facilities are better. But Manipur can be an option depending on weather and environmental factors,” Singh revealed.
All cyclists are at home and have their cycles with them, but they are unable to use them due to the lockdown. Necessary equipment like wattbike (stationary cycle for training) are still in Delhi. The CFI is in talks with the Government to allow them to transport the training equipment as well as the cycles in Andaman and Nicobar. “Private companies can transport the equipment but we will need to procure special passes. I have sent a letter to the Sports Ministry and hopefully, things will be sorted out soon,” he said.
Most of the top cyclists have been spending time indoors and trying to maintain fitness, but that is not enough considering the CFI was targetting the Asian Championships and Asian Games. The CFI has written to the District Magistrates in Manipur as well as Andaman and Nicobar to allow cyclists to train outdoor while following necessary health measures. “Hopefully, that will be allowed soon. We need to train. Otherwise all our gains will be lost,” a member of the National camp said on condition of anonymity.
The New Indian Express