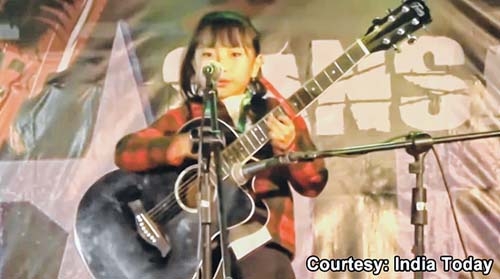 New Delhi, May 2
An absolutely fantastic video of a little girl singing a song by Neil Young during a function is doing the rounds of the internet. S Horyaowon Pheirei is from Kachai village in Manipur's Ukhrul district and her rendition of Neil Young's song has gone viral on the internet.
Pheirei's video was shared on Facebook by a page called OK North East on April 30. The clip shows Pheirei, dressed in a shirt and skirt, playing the guitar on stage while performing her rendition of Heart of Gold. Not only was Pheirei melodious enough but she played the guitar like a professional musician during the function as the audience cheered.
"We bet this is the best thing you have heard today! A little girl from Manipur is singing Neil Young's 'Heart of Gold'. She is S Horyaowon Pheirei from Kachai Village, Ukhrul district, Manipur," OK North East said in the caption of their post.
The internet is mesmerised by her voice and commended Pheirei for her talent in the comments section of the video which garnered several likes and shares.
"She's gotta powerful voice and will surely make it big one day. She should be sent to The Voice," a user said.
Another added, "Very powerful voice. Keep it up."
Neil Young is a singer and songwriter from Canada and is acclaimed for his songs such as Harvest Moon and The Painter. Heart of Gold was released as the first single from his album Harvest in 1972.
India Today