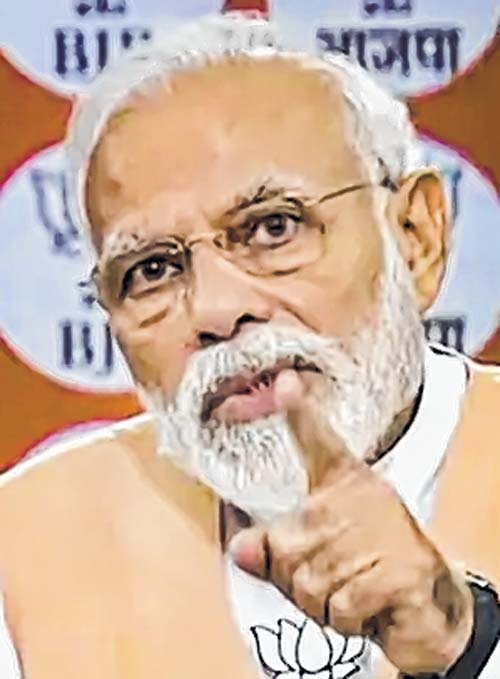 New Delhi, May 30
Prime Minister Narendra Modi wrote an open letter to the citizens of the country on Saturday, the day he completes one year of the second term in office. PM Modi listed out some of the key achievements of his Government like the abrogation of Article 370, settlement of the Ram Temple issue, criminalisation of Triple Talaq and the amendment to the Citizenship Act.
Asserting that when he was elected for the second term in 2019, he had shown the dream to every citizen of taking India to new heights and making it a global leader and that the decisions taken in the last one year were directed at fulfilling this dream.
On the Centre's decision to abrogate J&K's special status under Article 370 and the bifurcation of the State into two Union Territories in August 2019, the Prime Minister said, "Article 370 (abrogation) furthered the spirit of National unity and integration."
Taking about Supreme Court's unanimous judgement on the construction of Ram temple in Ayodhya, PM Modi said it brought an amicable end to a debate which had been persisting for centuries.
Listing other key decisions of his Government that added "momentum to the Nation's development trajectory", Modi said the creation of the post of the Chief of Defence Staff was a long-pending reform that has improved coordination among the armed forces.
He wrote that several people-friendly laws were ushered in the last one year, and that the Parliament broke decades-old record in terms of productivity.
On the COVID-19 outbreak and how it has brought the Nation's hopes and aspirations to a halt, he said, "While on one hand are powers with great economic resources and state-of-the-art healthcare systems, on the other hand is our country besieged with problems amidst a vast population and limited resources," he said,
Noting the 'tremendous suffering' faced by labourers, migrant workers, hawkers and small scale industries, the PM said that the Nation will have to ensure that inconveniences that we are facing do not turn into disasters.
PM Modi pushed the agenda of Aatmanirbhar Bharat Abhiyan saying becoming self-reliant was the need of the hour. "We have to move forward based on our own abilities, in our own way, and there is only one way to do it - Aatmanirbhar Bharat or Self-reliant India," he said, adding, "This initiative will usher in a new era of opportunities for every Indian, be it our farmers, workers, small entrepreneurs or youth associated with startups."
PM Modi said he successfully empowered the poor, farmers, women and youth to shrink the rural-urban gap. "The list of such historic actions and decisions taken in National interest would be too long to detail in this letter. But I must say that every day of this year, my Government has worked round the clock with full vigour, taking and implementing these decisions," Modi said.
"Powered by the Mantra of 'Sabka Saath, Sabka Vikas, Sabka Vishwas' India is marching forward in all spheres," he said. Today, 130 crore people feel involved and integrated in the development trajectory of the nation, the Prime Minister said.  Zee News