'Enormous evidence' that coronavirus came from China lab : US 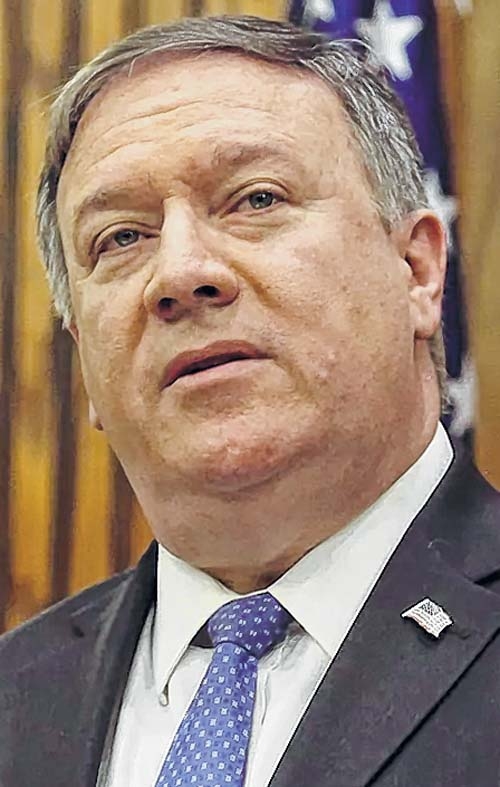 WASHINGTON, May 4
US Secretary of State Mike Pompeo on Sunday said "enormous evidence" showed the new coronavirus originated in a lab in China, further fueling tensions with Beijing over its handling of the outbreak.
Pompeo's comments came as Europe and parts of the United States prepared to cautiously lift virus lockdowns as signs emerge that the deadly pandemic is ebbing and Governments look to restart their battered economies.
More than 243,000 people have been killed and 3.4 million infected worldwide by the virus, which has left half of humanity under some form of lockdown and pushed the global economy towards its worst downturn since the Great Depression.
US President Donald Trump, increasingly critical of China's management of the first outbreak in the city of Wuhan in December, last week claimed to have proof it started in a Chinese laboratory.
Scientists believe the virus jumped from animals to humans, after emerging in China, possibly from a market in Wuhan selling exotic animals for meat.
Trump, without giving details, said Thursday he had seen evidence the Wuhan Institute of Virology was the source, appearing to echo speculation fueled by US right-wing radio commentators about a secret lab.
China denies the claims and even the US Director of National Intelligence office has said analysts are still examining the exact origin of the outbreak.
Pompeo, a former CIA chief, told the ABC he agreed with a statement from the US intelligence community about the "wide scientific consensus that the COVID-19 virus was not man-made or genetically modified."
But Pompeo went further than Trump, citing "significant" and "enormous" evidence that the virus originated in a Wuhan lab.
"I think the whole world can see now, remember, China has a history of infecting the world and running substandard laboratories."
Pompeo said early Chinese efforts to downplay the coronavirus amounted to "a classic Communist disinformation effort. That created enormous risk.
"President Trump is very clear: we'll hold those responsible accountable."
US news reports say Trump has tasked US spies to find out more about the origins of the virus, as he makes China's handling of the pandemic a centerpiece of his campaign for the November Presidential election.
The United States has the most coronavirus deaths in the world at more than 66,000 and Trump is keen for a turnaround to help reduce the economic pain, with tens of millions left jobless.
Florida is set to ease its lockdown Monday, as other States wrestle with pressure from demonstrators -- some armed - who have rallied against the restrictions.
There are signs the pandemic is slowing in some parts of the United States.
In New York, the epicenter of the US outbreak, an emergency field hospital erected in Central Park is set to close as virus cases decline.                Agencies