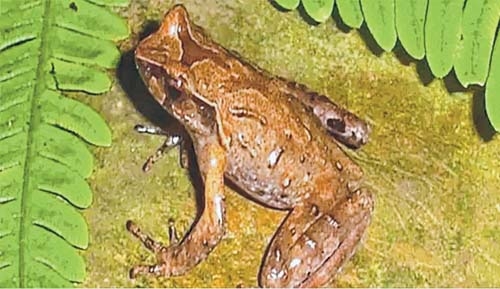 Bengaluru May 5
Three new species of horned frogs have been discovered from the forests of North East India-Horned frogs, named so after the fleshy, horn-like projection on their upper eyelids, are found in the forests of North East India. In 2018, a group of researchers from Ireland, UK and India had discovered four species of horned frogs in the region. In a new study, the same group of researchers have now added three more species to this list, taking the total count of horned frog species in North East India to twenty one.
The study, published in the Journal of Natural History, was carried out by biologists from the University College Dublin (UCD), Ireland, the Natural History Museum (NHM), UK, and the University of Delhi (DU), India. These discoveries come from the States of Nagaland and Manipur.
One of the new species is named after the Dzükou Valley, which brims with biodiversity. Megophrys dzukou, also called the Dzükou Valley Horned Frog, was found only in the valley and could be potentially endangered.
"The Dzükou Valley holds prestige for its natural beauty and is promoted as a tourist attraction. However, increasing tourism brings potential conservation threats to vulnerable endemic species," says Dr Rachunliu G Kamei, now a researcher from the NHM. The researchers hope that the name will resonate with the local people who are the guardians of the valley.
The other two species are named using words adapted from local tribal languages to create a sense of ownership, pride and relatability. The Naga Hills Horned Frog (Megophrys awuh­­) derives its name from the Pochury words 'awuh', which means 'frog'. The Tamenglong Horned Frog (Megophrys numhbumaeng), gets its name from 'nwmbwmaeng', which means ‘forest spirit' in the Rongmei (Ruangmei) language of Manipur.
All three new species differ from each other in their size and in the length of the ridges of skin that begins near the eyes. M. dzokou is the smallest of the three and either has no ridges, or, if present, has it only until the trunk. In M. awuh and M. numhbumaeng the ridges extend to the end of the trunk. M. dzokou also has narrow lateral ridges on toes, which are absent in the other two species.
Frogs are vital to a healthy ecosystem, and the names of these new species aim to encourage the locals to protect the biodiversity of this region.
"I grew up personally witnessing the rapid changes in the North East Indian landscapes, where jungles were disappearing with shocking speed", recalls Dr Kamei.
The study, a result of fourteen years of research, including treacherous fieldwork and careful examination of museum species, provides a monograph—a comprehensive account of all known species within a group—of Asian Horned Frogs of genus Megophrys found in North East India and Bangladesh.
From the time it was named in 1893 up to 2007, the Little Karen Hills Horned Frog (Megophrys parva) was thought to have extensive geographical distribution. The name served as a 'catch-all' species, where most small horned frogs found in the mountains of Nepal, North East India, Indochina and peninsular Thailand were called so. After investigating many museum specimens and genetic analyses, it is now known that it represented eight different species, including the three new ones. Although they look superficially similar to M. parva, the study found that the new species were genetically very different and are found in distinct regions.
During the study, the Zunheboto Horned Frog (Megophrys zunhebotoensis), which was previously identified from only two individual specimens, was found in numerous sites in Nagaland and Manipur. The study also shed light on the known geographical range of four other species of horned frogs.
"This study is a testament to how little is known about the most threatened animal groups, frogs, in North Eastern India", says Dr Stephen Mahony from UCD and the NHM (and previously DU) who led the study.
As researchers continue to unearth new species in the biodiversity hotspot of North East India, it also draws attention to the need for conservation of the fragile habitat.
Research Matters