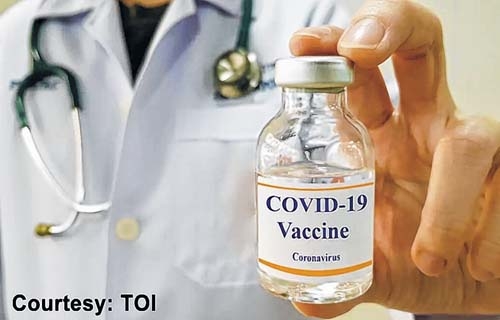 New Delhi, May 6
An Italian medical firm has claimed to have developed a vaccine that neutralises the novel coronavirus in human cells. According to tests carried out at Rome’s infectious-disease Spallanzani Hospital, the vaccine has antibodies generated in mice that work on human cells, Italian news agency ANSA reported.
Tests conducted on mice by a team of scientists at Italian medical firm Takis showed they developed antibodies after a single vaccination that can block the virus from infecting human cells, ANSA reported.
Luigi Aurisicchio, CEO of Takis, the firm behind the vaccine, told ANSA that a Covid-19 candidate vaccine had neutralised the virus in human cells for the first time.
“According to Spallanzani Hospital, as far as we know we are the first in the world so far to have demonstrated a neutralization of the coronavirus by a vaccine. We expect this to happen in humans too,” Aurisicchio told ANSA.
After observing that five candidate vaccines generated a large number of antibodies, researchers selected the two with the best results.
All of the candidate vaccines currently being developed are based on the material genetic of DNA protein “spike”. They are injected with “electro-poration” technique, which consists of an intramuscular injection followed by a brief electrical impulse, helping the vaccine enter the cells.
Researchers at Takis believe that this makes their vaccine particularly effective for generating antibodies in the lung cells, which are the most vulnerable to corona-virus, ANSA reported.
Another Italian company ReiThera has said its coronavirus vaccine had shown a “strong immune response” in animals. “The antibodies are able to prevent the infection and the T cells eliminate the virus that has already entered the organism,” it told news agency ANSA.
So far, at least 254,532 people have died from Covid-19 since the outbreak first emerged in China last December, and more than 3,629,160 cases have been confirmed in 195 countries and territories.
On Tuesday, Israel’s Defence Minister Naftali Bennett had claimed developing an antibody to the coronavirus at the country’s main biological research institute IIBR that can attack the virus and neutralise it within the bodies of those who contract it.
The statement, however, did not clarify whether human trials for the vaccine were conducted. According to PTI, the IIBR has conducted some clinical trials. The researchers have identified the protein that is efficient in killing the virus in a patient’s body, and the institute would be publishing a paper soon about the findings, PTI stated.
The Indian Express