Trouble makers at QCs will be jailed : CMCOVID Care Centre to be opened today 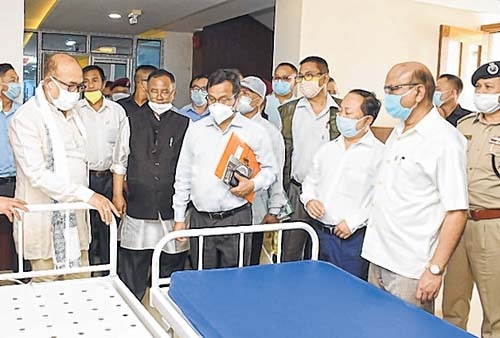 Imphal, Jun 9 (DIPR)
Chief Minister N Biren Singh along with Health and Family Welfare Minister L Jayantakumar and Youth Affairs and Sports Minister Letpao Haokip inspected the works going on at UNACCO School, Meitram in Imphal West district for opening of a COVID Care Centre. The Chief Minister and the Ministers were briefed by the chairman of the school’s governing body N Irabanta regarding different blocks and campus of the school.
Speaking to media persons by the sideline of the inspection tour, N Biren said that mischievous and undisciplined inmates of quarantine centres would now be jailed.
Expressing serious concern that some inmates do not bother to maintain safety guidelines laid down by the Government at this time of crisis, he observed that it would be never possible to keep vigil on anybody round the clock.
As such, the State Government has now kept aside a separate block in Central Jail, Sajiwa which can accommodate 90 mischievous inmates of quarantine centres.
The Chief Minister said that the COVID Care Centre at UNACCO School would start functioning from tomorrow. The Centre was earlier planned to have only 100 beds. However, it has now the scope of increasing the capacity to 300, he added.
As of now Churachandpur has the highest number of COVID-19 cases and containment zones, the Chief Minister informed and added that Bishnupur District Hospital has also started admitting COVID-19 patients apart from RIMS and JNIMS.
The State Government is putting in efforts to increase the number of institutional and community quarantine centres as well considering possibility of return of more Manipuri people from outside the State, said the Chief Minister.
Chief Secretary Dr J Suresh Babu and other high ranking officials of the State Government also accompanied the Chief Minister during the inspection.
Later Chief Minister N Biren and YAS Minister Letpao Haokip inspected the construction work of National Sports University’s permanent campus at Haraothel/Koutruk. The Chief Minister and the Minister were briefed by the officials of NBCC (India) Ltd, the work agency of the project.
N Biren said that the inspection came after he had a video conference on Monday with Union Youth Affairs and Sports Minister Kiren Rijiju on early completion of the campus construction work. The Chief Minister further said that it is a pet project of Prime Minister Narendra Modi and also a dream university of the people of the North East and Manipur in particular. The project was delayed due to a communication gap between the Centre and the State. As the matter has been sorted out now, the project would see the light of day soon, the Chief Minister said.
Now, the work agency has been changed and the project has been handed over to NBCC (India) Ltd. As such, the new agency has come up with new construction plans, drawing, blueprint, etc, he informed. Biren further said that a committee headed by the Chief Secretary has been formed to oversee the work progress. Union Youth Affairs and Sports Secretary and Joint Secretary and Commissioner (YAS), Government of Manipur would be the members of the committee which would submit reports to the Chief Minister and Union Minister Kiren Rijiju on weekly basis. As such, the project would see visible changes soon, the Chief Minister exuded. The proposal for setting up of the National Sports University was announced in 2014. The foundation stone for construction of the University was laid by Prime Minister Narendra Modi on March 16, 2018. Kiren Rijiju visited the campus site in September last year.